Karolína won her first career WTA Premier trophy at the Western & Southern Open in Cincinnati. On her way to the title she beat three top 10 opponents, including Angelique Kerber in the final.

In August after the Cincinnati tournament, Karolína climbed to No. 11 in the WTA rankings, becoming the Czech number one for the first time in her career.

At the 17 previous Grand Slams she had never made it through the 3rd round, but the New York tournament changed it all. On her way to the final she lost only one set and defeated both Williams sisters, before losing a dramatic final battle to the incoming world number one Angelique Kerber. 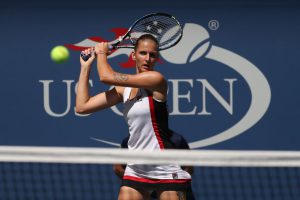