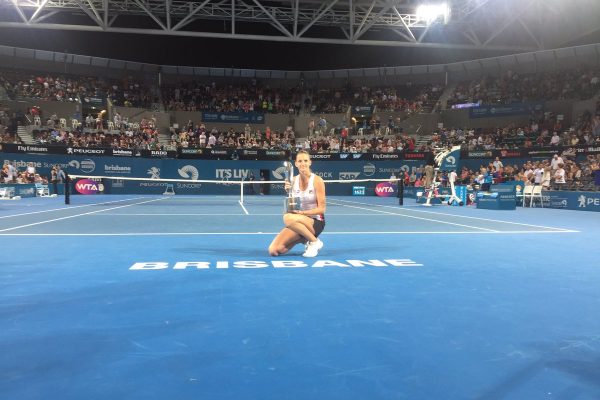 Superb start of 2017! Karolína Plíšková routed all her opponents in Brisbane, Australia and ended the tournament with a 6-0, 6-3 victory over Alizé Cornet! Karolína thus won her seventh WTA Tour title and is in great form before the forthcoming first Grand Slam of the season.

Plíšková came storming out of the blocks in the first set, spent only 19 minutes on court and dropped the bagel on Cornet. She lost only five points during the entire opening set. The helpless opponent called her coach onto the court, but he only stated that there was nothing to do about it – the Czech played like a machine. Karolína presented herself with accurate rallies and found ideal balance between accuracy and optimal strength of her shots.

“Apparently Karolína is in a hurry, but we don’t mind.” - Vojtěch Bidrman, TV commentator

The second set was a bit closer, but still Karolína seemed unstoppable. She didn’t allow a single break point and served perfectly, just as she did during the whole tournament. She lost only two first serve points with a percentage of 90%, she hit a total of 30 winners and clinched a well-deserved title in Brisbane.

“My thanks go to my coach, David Kotyza. It was our first tournament together and I think it wasn’t bad.” - Karolína Plíšková

Following her triumph in Brisbane Karolína Plíšková will move to world number five in the WTA ranking, taking the spot back from Dominika Cibulková of Slovakia. In Brisbane she played her 17th WTA Tour final and won her seventh trophy!