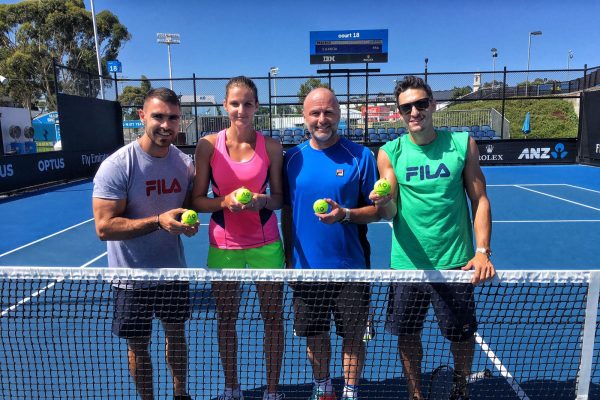 Karolína Plíšková started the 2017 season superbly. She triumphed at her first tournament in Brisbane and radiates confidence before the season’s opening Grand Slam. At the Australian Open she would like to repeat her last year’s success from New York, where she broke her Grand-Slam curse and made it all the way to the final.

Following your triumph in Brisbane you had a week off. How do you feel before the first Grand Slam? Do you think you are well prepared for the tournament?

I didn’t have the entire week off – I had just two days of rest and then started practicing here in Melbourne. I feel very good, the practices went quite well and together with my team we were tuning up my form for the first match, which I was supposed to play on Monday. But in the end I’ll play on Tuesday, so we still have a bit of time. But I believe I’m well prepared already.

How do you feel on the court here in Melbourne? Do you like local conditions?

I practiced several times on smaller courts. They’re really quite fast, which is what I like. The bigger courts are a bit slower, but still it’s quite acceptable for my tennis. It suits me, so I hope it’ll be the same in my matches. We’ll see.

Has something changed in the Czech Republic following your last year’s US Open final? Have you noticed a big increase in the number of your fans and greater attention?

I don’t think so. I have fans who support me and I’m very grateful for that, but it’s the same as before. I’m not sure how many people in Czechia watch the US Open, but I’d say it’s not many. I felt a great change following our triumph in the Fed Cup; then it was very apparent. Fed Cup has a great audience in Czechia; it’s the biggest event in women’s tennis and the Czechs take great interest in it.

“Somewhere in her head there is a dozing champion. We just need to find her and wake her up.” - David Kotyza

Has your preparation for Grand Slam tournaments changed in any way?

Now, before the Australian Open, the preparation is almost the same as before last year’s US Open. Then I also won a tournament in Cincinnati and withdrew from New Haven to have more time to rest and practice. I wanted to be well prepared for the Grand Slam and now it’s the same. I played a number of good matches in Brisbane, won the tournament, and I didn’t see a reason to play another event, so that’s why I didn’t go to Sydney. I think it would be quite risky with respect to the current conditions here in Australia and I definitely didn’t want to underestimate anything. Last year in New York it worked, so we’ll see how it’s going to go here. Grand Slams are the most important tournaments, so that’s why I try to adjust everything to that.

At which Grand Slam do you think you have the biggest chance to win the title?

Now I should probably say the US Open because last year I broke my Grand-Slam curse there and played in the final. (laughs) But I think I have a chance almost everywhere, the smallest perhaps on clay at the French Open.

After your triumph in Brisbane you are one of the favorites at this tournament. Do you feel it in the same way?

I definitely wouldn’t say I’m a favorite to win the tournament. There are many players here and every one of them wants to succeed at a Grand Slam, so now there’s no point talking about who is a favorite and who is not. I want to go step by step. Now I know my first-round opponent, so my goal is to get prepared as well as possible for the opening match and then we’ll see how everything goes. I think there is a number of players here who are better than me. It’s definitely going to be a big battle because we are all excited to be here and all the players want to achieve the best possible result. We have all practiced very hard and each of us wants to convert this effort into great achievements in tournaments.