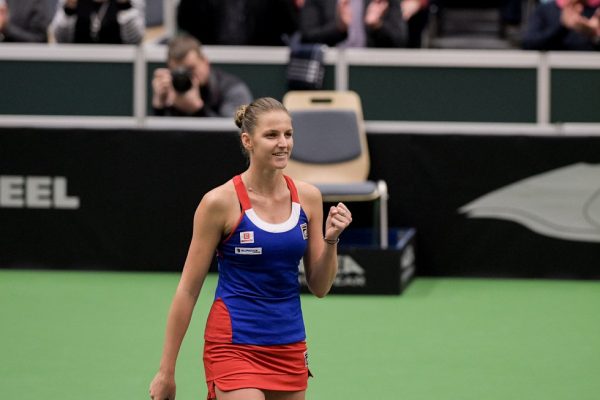 The Fed Cup battle against Spain is tied at 1-1 after Saturday. First, Barbora Strýcová lost to Garbiñe Muguruza in three sets, but then the Czech number one, Karolína Plíšková, secured the first point for the Czechs, beating Lara Arruabarrena 6-4, 7-5.

The Czech Republic hosts a Fed Cup tie for the first time in fifteen months – last time the home fans saw the team led by Karolína Plíšková overcome Russia in the final in Prague’s O2 Arena.. However, the situation has changed since. This time, in front of the sold out arena in Ostrava, the Czech players are favorites on the paper against Spain.

Karolína handled well her tricky role of the team’s number one – everyone expected nothing but a win from her. Despite not showing the most impressive of performances, she played exactly what she needed. Against Arruabarrena she had only one critical moment – in the second set, when she lost her serve for the first time and faced a set ball.

But Plíšková coped with it without problems. “I was decided to go for it. I played actively and she couldn’t send the ball back. So, that was fine.” Karolína was, therefore, able to save some energy for the Sunday’s rubber against Muguruza, which is scheduled for 13:00 in Ostravar Arena.

“It was an obligatory win. Although I didn’t play amazing tennis, the point is what counts. I think 1-1 after Saturday is good.” - Karolína Plíšková

Karolína has won the last four head-to-head games against the current world number seven. Last year she met Muguruza twice and celebrated victory both in Cincinnati, and in Singapore at the WTA Finals, after showing an unbelievable comeback. Despite being down 0-4 and 2-5 in the decider she didn’t give up and turned the drama into a 7-5 victory.