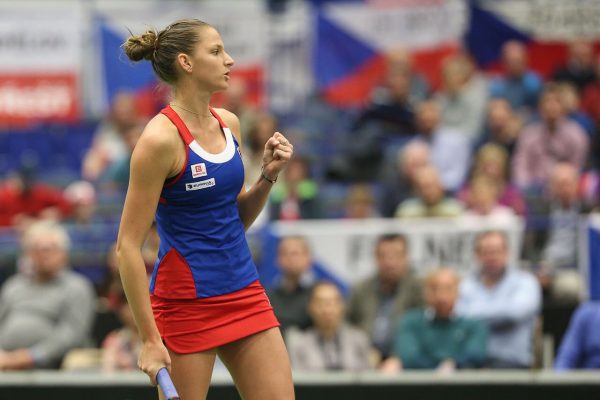 Karolína Plíšková brought her excellent form from the start of the season to the Fed Cup as well. The team competition returned to the Czech Republic after fifteen months and the sold out Ostravar Arena had a reason the celebrate. Mainly thanks to the Czech number one, Karolína Plíšková, who secured two points in her singles games, captain Pála’s team defeated Spain and advanced to the semifinals.

The Czech Fed Cup dominance continues. Barbora Strýcová followed on the two points by Plíšková, sealed the victory for the home team, and decided the tie after the singles already. In the final doubles match, Lucie Šafářová and Kateřina Siniaková lost to Sánchez and Sorribes in three sets, setting the final score at 3:2 for the Czechs.

Today, Karolína virtually wiped the world number seven, Garbiñe Muguruza, off the court. She showed excellent performance and won the match 6-2, 6-2 in just about an hour. The spectators in Ostrava were thrilled and a Mexican wave started running around the arena. “I’ve never seen that at a tennis match,” Plíšková was amazed after her impressive victory.

Karolína played great tennis and confirmed that Muguruza is her favorite opponent, beating her for the fifth time in a row! She played both aggressively and accurately. “I felt confident against her. I returned much better and my serve worked for most of the match. I’m satisfied with my performance,“ Karolína Plíšková described happily right after the match.

When Strýcová defeated Arruabarrena in her second match, it was clear that the Czech Republic will advance to the semifinals for the ninth successive year, aiming at the fourth consecutive Fed Cup title! Nevertheless, there was no time for celebrations as the tournament schedule is very busy. Karolína left the Czech Republic only a few hours after her match. Next stop: Doha, Qatar.