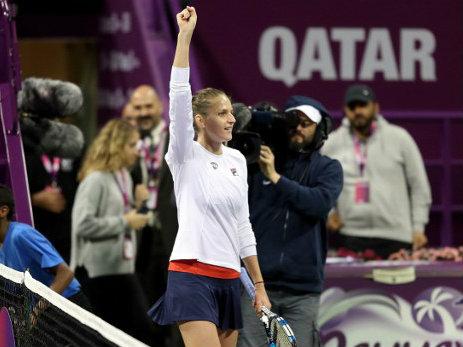 Karolína Plíšková is unstoppable in 2017! After triumphing in Brisbane and reaching the quarterfinals at the Australian Open, she remained unbeaten at the prestigious tournament in Doha, Qatar. In the final, she overcame the former world number one Caroline Wozniacki 6-3, 6-4 to take home her eighth career title! With this win, Plíšková improved her 2017 record to 15 wins and only one loss.

Karolína stormed into the match, quickly broke her opponent’s serve twice, and built a comfortable 4-0 lead. Wozniacki then fought back and reduced the gap to 4-3, but the long-legged Czech got right back on track to win the opening set 6-3.

In the second set, both players were holding their serves quite comfortably. This applied all the way to the Dane’s serve at 5-4. Plíšková built a 40-15 lead and capitalized on her first match point, settling more and more comfortably among the world’s tennis elite.

On her way to the title, Karolína met mostly players with whom she had negative head-to-head records – 1-2 with Garcia, 0-3 with Cibulková, and 0-3 with Wozniacki. Despite the statistics, she managed to buck the odds, which makes her triumph in Qatar especially valuable.

With her excellent, aggressive tennis, Karolína Plíšková reached her 18th final and won her 8th title. Next week she is going to play at the WTA Premier 5 event in Dubai.