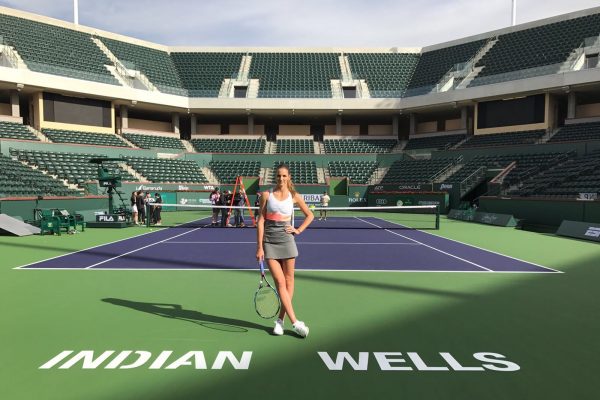 Tonight, Karolína enters her favorite event, the BNP Paribas Open at Indian Wells. Last year she made it here all the way to the final, where she lost to Azarenka in a tight three-setter. Now she would like to repeat her last year’s achievement.

Karolína already played one doubles game with Caroline Garcia in the sunny Californian destination, in order to get into a match rhythm following a longish break. She is No. 2 seed at Indian Wells. “I feel great, I had almost two weeks of very good practice,” says Plíšková, who is satisfied with the pratice period. “We practiced every day in several phases. I also worked on my physical condition and shots. I believe I’m prepared,” Karolína says.

She played her last singles match on 21st February in Dubai, where she was brought to earth in a defeat by Mladenović following her previous triumph in Doha. In her first match at the BNP Paribas Open at Indian Wells she will face the Olympic Champion Monica Puig of Puerto Rico. “She’s a very good player, she’s achieved some excellent results. But I’m confident, I already managed to beat her,” Plíšková remembered their head-to-head record, which goes 3-0 in her favor.

Last time Karolína Plíšková faced Puig on grass in Notthingham last year, beating her in the semifinal 6-2, 6-2 before winning the entire tournament. In California, Karolína wants to repeat her last year’s smooth cruise, during which she played great tennis and eliminated players like Ivanović, Konta or Kasatkina. “Last year I was in a really great form, I have nice memories of that. This tournament is one of my favorites, so hopefully I’ll stay here for as long as possible,” concluded Karolína, who shot a campaign for the latest Fila Tennis collection before the event.

Karolína Plíšková will play her match against Monica Puig on Friday at 7:00 PM local time (Saturday, 4:00 AM CET).