Karolína Beats Vandeweghe in Her First Match on Clay 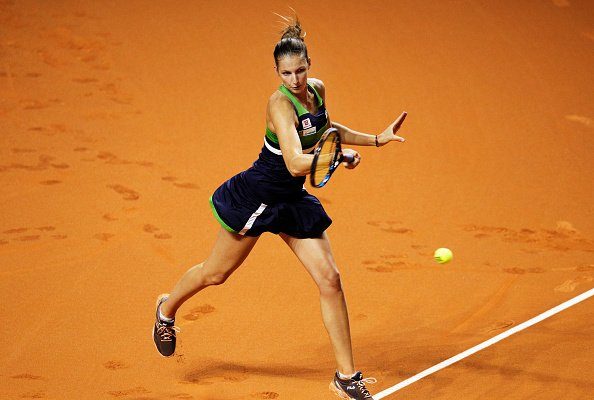 Karolína Plíšková has entered the clay season perfectly. The world No. 3 started the Stuttgart tournament with a two-set win against the American Coco Vandeweghe, who helped eliminate the rejuvenated Czech team from the Fed Cup this past weekend. In the quarterfinals, Plíšková will face the last year’s finalist and the local hope Laura Siegemund.

The Czech number one, Karolína Plíšková, played her first match since the end of March when she lost to Caroline Wozniacki in the semifinals in Miami. Her first appearance in Stuttgart showed that she is well prepared for clay courts as well. “Nevertheless, the preparation again didn’t go as planned – I had tooth problems. It wasn’t ideal but in spite of this I believe I’m quite well prepared,” said Karolína, who could rely on a very good first serve against the American, posting a total of 8 aces.

She had a negative 1-2 record with the Australian Open semifinalist Vandeweghe, plus the American already played several matches on clay this year. This past weekend it was mainly her who eliminated the Czech team from the Fed Cup semifinals in Florida, and in Germany she overcame Jelena Ostapenko. But the twenty-five-year-old Czech confirmed her role of a favorite and beat the world number 23 in straight sets 7-6, 6-4. “Coco played very fast, it wasn’t easy at all, but it’s a good start and an important win,” Plíšková, who is accompanied by her father Radek in Stuttgart, commented on her performance.

Today, Karolína can already reach her fifth semifinal this year. For the first time in her career she will face Laura Siegemund, who defeated Svetlana Kuznetsova and confirmed that clay is her favorite surface. Last year she had a sensational run at this event, going all the way from the qualification to the final, and this year she played very well in Charleston. “She’s a home player, so the fans will be against me, but I’m used to it from the Fed Cup. It definitely won’t be easy,” Plíšková concluded.