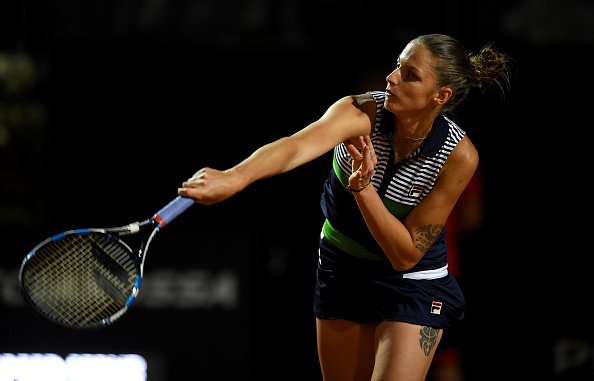 Karolína Plíšková defeated Timea Bacsinszky on clay in Rome and will play in the quarterfinals. It was for the first time this year that she won two consecutive matches on clay and today at 4:30 p.m. she will face the Ukrainian Elina Svitolina, with whom she lost only once out of six encounters, at the last year’s Hopman Cup.

Karolína Plíšková is starting to show that she can play top tennis even on clay. She wasn’t very successful on this surface in Prague and Madrid, but the great form from the beginning of the season is back! In Rome she started with a crushing 6-1, 6-1 victory over Lauren Davis and she didn’t lose a set against Bacsinszky either. She goes through after beating the Swiss 6-1, 7-5.

Plíšková again avoided unforced errors and controlled the evening game at the centre court. “I’m very satisfied, both with the result and with my game. It was definitely my best match on clay this year,” Plíšková said contentedly. The decisive break in the second set came at 5-5. Then she fought off four breakpoints and ended the match.

She overcame Bacsinszky for the third time in a row and improved their head-to-head record to 3-2. In her eighth quarterfinal on clay on WTA tour and her first in the WTA Premier 5 category, she will face Elina Svitolina. She managed to beat the Ukrainian five times already, losing only once at last year’s Hopman Cup. “For me, every match on clay is tough and Svitolina has had a great season so far. It definitely won’t be easy, but if I follow up on today’s performance, I have a chance to succeed,” Karolína said.

If Plíšková wins this game, she will become world number two for the first time. The only player left ahead of her would be Angelique Kerber of Germany.