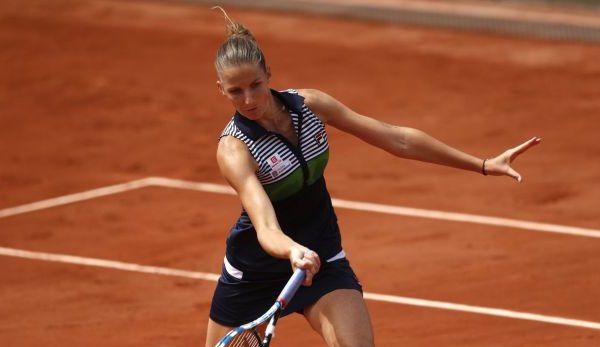 Karolína Plíšková virtually worked like a dog to turn the score around in the round-of-sixteen match at the French Open. She overcame Veronica Cepede of Paraguay after three tough sets and while being down 3-4 in the decider she had to fend off a break point. In the quarterfinals, she will face the home player Caroline Garcia.

Karolína Plíšková yet again disproves the talks that she can’t play great tennis on clay. After beating Zheng of China, Alexandrova of Russia and Witthöft of Germany she also eliminated the Paraguayan Cepede. The 97th player in the world, who overcame Lucie Šafářová and Anastasia Pavlyuchenkova earlier in the tournament, gave Karolína a hard time and wasn’t far from a sensational victory, but in the end it’s her who packs her luggage and leaves Paris.

Nevertheless, the first set was like a nightmare for Karolína. She made 16 unforced errors and lost it 2-6. After the set she took a break, went to the locker room and returned a changed woman. The No. 2 seed started dominating and went into a quick 5-0 lead. In the end, she won the second set 6-3 and sent the match into the decider.

The third set was a battle of nerves. Plíšková broke her opponent’s serve and was up 2-1, but then lost hers straight away. Critical moments came in the sixth game when Karolína saved two break points, and another one while being down 3-4. Then the big-hitting Czech achieved a decisive break and capitalized on the first match point on her serve. In the end, Karolína went through to the final eight with a hard-fought 2-6, 6-3, 6-4 win. “You have no idea how happy I am. My opponent played great tennis and I didn’t feel good on the court,” Karolína Plíšková commented after the match.

In the quarterfinals, she will face the home player Caroline Garcia, with whom she has an equal record 2-2. This year she defeated Garcia in Doha, where she won the title in the end. “I’m looking forward to the match. Caroline is a great player and we’ve played against each other a few times already. I’m aware the fans will be against me; it’s obvious they’ll be supporting the home player,” Karolína concluded.