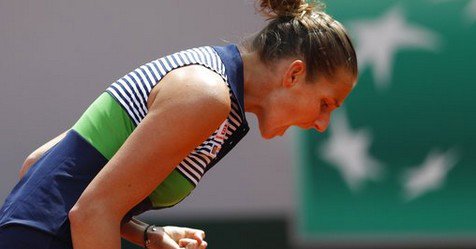 Karolína Plíšková once again (for the fourth time already) improved her maximum at this year’s French Open. In today’s quarterfinal, the No. 2 seed overcame the home player Caroline Garcia and in tomorrow’s semifinal she will face Simona Halep, who showed an incredible comeback against Elina Svitolina.

Karolína Plíšková is in excellent form. At the Roland Garros, where she has never won more than one match until this year, she already advanced to the semifinal! Before today’s encounter, she had an equal head-to-head record against Garcia.

At 5-4 in the first set, she failed to serve it out, but she was stronger in the tie-break. Garcia had significantly more winners in the opening set, but she also recorded more unforced errors. The second set was long tight, with both opponents being absolutely dominant on their serve. Until 5-4.

At the decisive moment, Plíšková seized the opportunity and after one hour and 51 minutes celebrated her advancement to the semis, where she will play against Simona Halep. The Romanian was already down 3-6, 1-5 in the quarterfinal against Svitolina, but managed to turn the score around and won.