Tough Day in Eastbourne! Plíšková Wins Twice in One Day 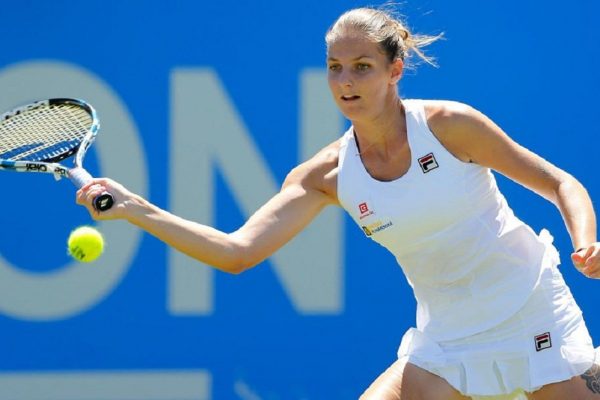 In her first tournament on grass this year, Karolína Plíšková has fought her way through to the semifinal already. In the afternoon, the defending finalist defeated Shuai Peng of China 7-6, 6-4 at the WTA Premier event in Eastbourne, before beating Svetlana Kuznetsova 6-7, 6-2, 6-4 early in the evening.

In the battle for the quarterfinals, Karolína faced the dangerous Shuai Peng, with whom she has played only once so far. Three years ago in Miami she was allowed only five games by Peng, but today she got back at the six years older opponent for the loss. However, she had to come back from being a break down in both sets. “But I always managed to focus and played better at the end of both sets,” Karolína commented on her match.

Less than three hours later, Plíšková appeared on the grass court again, this time ready to fight for the semifinal. She was facing a very strong opponent, Svetlana Kuznetsova, with whom she has already played three very tight matches. Last year in Cincinnati, on her way to the title, she succeeded in a three-set drama, whereas at the end of the year she lost in a similarly tight match in Singapore. And this year in the semifinal at Indian Wells, the Russian again emerged victorious from the battle after winning both tie breaks.

Today, it was an amazing spectacle again, as it has already become a custom when these two players face each other. Kuznetsova grabbed the opening set after fighting off three set points in the tie break. On the other hand, Plíšková dominated in the second set, won 6-2 and sent the match into the decider. In the third set, Karolína was down a break until 2-4. Then she took the initiative, won four games in a row and finished the game with a net volley winner.

“I’m quite tired but happy. I managed to turn the score around and such victories are always twice as valuable. I’m looking forward to the semifinal,” Plíšková said shortly after the match. Tomorrow she will fight against Johanna Konta for a chance to repeat last year’s final.