Form of Her Life! Plíšková Wins Third Title This Year 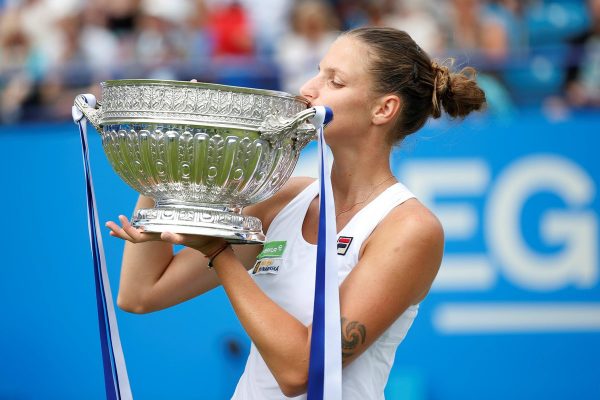 For the first time in her career Karolína Plíšková has won three WTA tournaments during one season. She won her 9th title on grass in Eastbourne, defeating Caroline Wozniacki in today’s final. She overcame the Dane 6-4, 6-4.

Karolína Plíšková’s record from this year’s final matches now stands at 3-0 and she has won all of her three titles at WTA Premier events. Today on grass in Eastbourne she defeated Caroline Wozniacki, just like on the way to her most recent triumph in Doha.

Plíšková has played her second consecutive final in Eastbourne. Last year she lost to Dominika Cibulková, but this time she was way more successful and won without losing her serve. She defeated the twenty-six-year-old Wozniacki 6-4, 6-4 and recorded her second win in their sixth head-to-head encounter.

“It was my best match at this tournament. Only a few balls decided about my win. I’m glad I’m heading to London with a title in my pocket. It will help me gain some confidence,” Plíšková commented on her performance in Eastbourne. On her way to the title she hit ten aces in the final. By the way, Karolína currently leads the ace count ranking again.

Plíšková has thus seized her second title on grass, after triumphing in Nottingham last year. Another challenge is the Wimbledon, where Karolína has never gone past the second round. “I’m glad my opening match in Wimbledon is scheduled for Tuesday. An extra day is definitely going to help me. I feel slightly tired. In the next two days, I’ll practice a bit and will get ready. I believe I’ll be prepared well,” Karolína Plíšková said.