Plíšková Wins Her First Match as World Number One 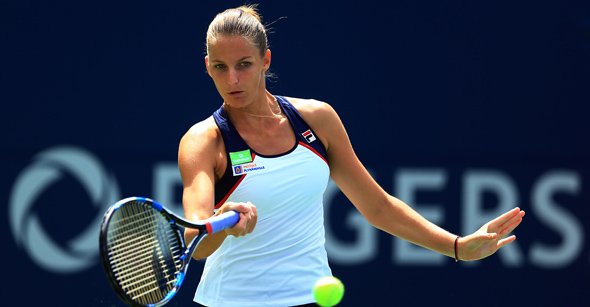 Karolína Plíšková won her first match as the world number one without any problems today, beating Anastasia Pavlyuchenkova 6-3, 6-3 in Toronto. In five head-to-head encounters with the Russian she hasn’t lost a single set.

It was Plíšková’s first match since her loss in the second round at Wimbledon, after which she became the world number one. Despite struggling on serve and losing it four times today, she had the match under her control from the start till the end. Karolína was constantly at least one game up and converted seven of her nine breakpoints.

“I was slightly nervous before the match but then it faded away. At the end I was absolutely OK,” said Plíšková, who has recorded her first singles win in Toronto and defended her points from last year’s round of sixteen in Montreal. The Czech also plays in the doubles event, along with the home player Eugenie Bouchard – they reached the second round yesterday already.

Plíšková will fight for her first Rogers Cup quarterfinals with the talented Naomi Osaka, who has yet to beat a top 10 player (0-8). The nineteen-year-old Japanese defeated Anastasija Sevastova of Latvia today.