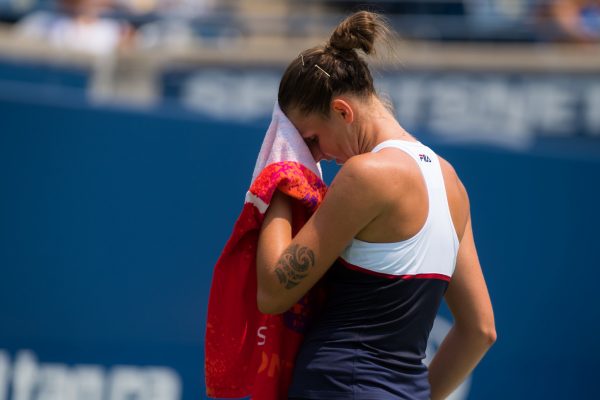 Karolína Plíšková has met Caroline Wozniacki for the fourth time already this year, and following the loss in Toronto their 2017 head-to-head record is now tied at 2-2. The Czech played a fantastic battle with the former world number one, although in the end she lost 5-7, 7-6, 4-6 and her Rogers Cup campaign in Toronto ended in the quarterfinals.

The course of the first set was significantly influenced by the rain, which interrupted the match four times. Plíšková entered the match perfectly, played aggressive tennis and Wozniacki was helpless. Before the rain delay, Karolína was up by 5-1 in the opening set. But the unplanned breaks put the Czech out of countenance, whereas Wozniacki quickly found her pace and surprisingly turned the score in the first set around. “I felt stiff, the rain breaks were quite long and my muscles got cold. It definitely affected me negatively,” Plíšková said after the match.

Both players held their serves in the second set and it was to be decided by the tiebreak, in which Plíšková was much braver, sufficiently aggressive as well as accurate. This meant she dominated the tiebreak and forced the third set. “This was very positive, I was really mad after losing the lead in the first set, but I managed to stay focused. I’m happy about it,” the current world number one found positives on her performance.

The decider was long developing in favor of Plíšková, who broke her opponent’s serve and was up by 4-2. Advancement to the semifinal was very close at that moment. But then Karolína reduced her aggressiveness, whereas Wozniacki showed her fighting spirit and won the third set 6-4. The spectators at the centre court saw an amazing battle full of great rallies and shots. “I’m very disappointed but I have to learn from it. Now there are two key tournaments ahead of me and I want to succeed,” said Plíšková, who is now traveling to Cincinnati to defend her last year’s title. Then the U.S. Open in New York awaits.