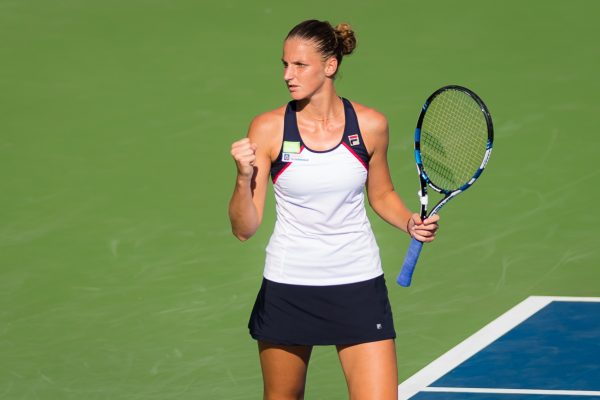 Karolína Plíšková boldly continues in her title-defense campaign in Cincinnati and she’s had a tough day today as she played her round-of-16 and quarterfinal matches within five hours! First she overcame Camila Giorgi of Italy in three sets and an hour and a half later she was on the court again for her next match, this time against the Dane, Caroline Wozniacki. She got back at the former world number one for the loss from Toronto a week ago and won in straight sets.

She resumed her match against Giorgi at 3-0 today, as it was postponed from yesterday due to rain. And it was a tight match indeed. The big-hitting Czech grabbed the opening set but lost the second, so the third one was to decide. Plíšková, however, totally dominated in the decider and dropped the unpopular bagel on her opponent. She posted 27 winners during the match and started getting ready for the quarterfinal.

Well, the preparation wasn’t very long. It lasted 90 minutes. “I took a shower, ate some sushi, listened to music and went for it again,” the current world number one commented on her break between the matches. If someone was worried that she might feel tired during the match against Wozniacki, they were mistaken. Plíšková’s performance on the court was among the best she’s ever shown.

Karolína Plíšková beat Caroline Wozniacki 6-2, 6-4. Yet again she was excellent on serve, hit four aces and especially her first-serve-points-won stats were dreamlike. Twenty-six of her first serves found the court and Wozniacki won only a single point! “I felt really great in the match against Caroline. Basically, there was not a single critical moment and that’s almost unbelievable in a match against such a good opponent,” said the satisfied Plíšková.

Wozniacki is Plíšková’s most frequent opponent. They already met five times this year and the Czech player achieved her third victory. Tomorrow she will face the Spanish Muguruza in the semifinal, with whom she has a superb head-to-head record. They’ve met seven times on the court and Plíšková has won six of the encounters, including two this year.