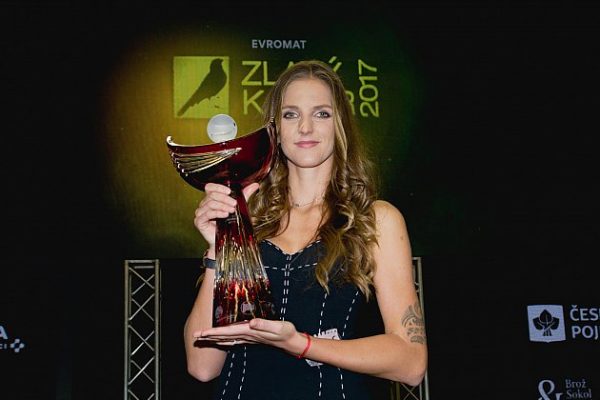 Karolína Plíšková has won her first Zlatý Kanár („Golden Bagel“) award. In the 25th year of the awards, organized by the Tenis magazine in cooperation with the Czech Tennis Association, she also became the best female player of 2017. Plíšková was absolutely dominant in the voting, winning 180 votes out of 190.

During the past season, the ace queen occupied the top position of the women’s tennis ranking for eight weeks, won three tournaments, and reached the Grand Slam semifinals at the French Open. She has become the best female player for the second consecutive year, and in 2014 and 2015 she received an award for the biggest progress in WTA rankings. But this is her first ever Zlatý Kanár award for the overall winner.

“I assess this year very positively. It included quite a few successes. Of course there were moments that didn’t go so well, but I believe I will make up for them next year,“ Karolína Plíšková, who dazzled with her black Dolce & Gabbana dress, commented after the ceremony.

Next year, Karolína would like to try to win a Grand Slam title as well as succeed in the Fed Cup team competition, in which this year, following the three previous triumphs, the incomplete Czech team was eliminated by the later winners from the USA. “It would be nice to succeed again. It will be essential to win the first round against Switzerland first, which surely won’t be easy. But I’m looking forward to the sold-out O2 Arena. The fans will definitely be great,” said Plíšková.

From tomorrow, Karolína will play Czech extraleague matches for the team of Prostějov. On 21st December she is going to travel to Thailand to play two exhibition matches and she starts her new season on New Year’s Day in Brisbane, Australia, where she defends her tournament title.