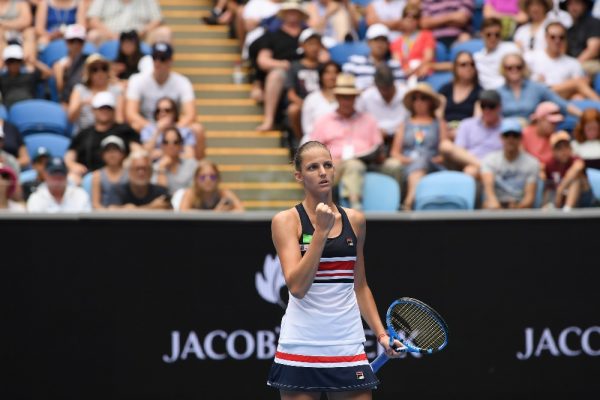 Karolína Plíšková came out victorious from the Czech Battle in the Australian Open third round. The Czech number one beat Lucie Šafářová in two tight sets to record her third consecutive win in their head-to-head encounters. In the round of sixteen she will face the winner of the match between Barbora Strýcová and Bernarda Pera.

At the season-opening Grand Slam, Plíšková first defeated Cepede of Paraguay, before beating the Brazilian Haddad Maia. In today’s Czech clash she overcame Lucie Šafářová 7-6 (6), 7-5. “It was a tough match, it’s always very emotional against your compatriots. We know each other very well, it was a tight match until the very last ball,” Plíšková commented on the match.

Both players held their serves without too much trouble in the first set, with Plíšková losing just six points on her serve, while Šafářová lost only ten. Hence it was time for a tie-break to decide. Šafářová had a set point but Plíšková fended it off with a forehand winner and added two more points to win the whole set. “My serve worked really well, I felt a bit like Ivo Karlović,” the Czech number one smiled after the match. “I had problems with her left-hand serve. Lucy’s serve wasn’t the fastest, but I had troubles on return,” Plíšková added.

In the second set, the fans already saw some break points. Šafářová saved one with a forehand winner, before failing to convert hers. So, it was Karolína who celebrated the first and decisive break of the match. At 5-5 she broke her opponent’s serve, went into a 6-5 lead and with the help of three aces she served the match out in the next game.

Plíšková can meet another fellow Czech in the round of sixteen, if Barbora Strýcová beats the lucky loser from the qualifying stage, the American Bernarda Pera.