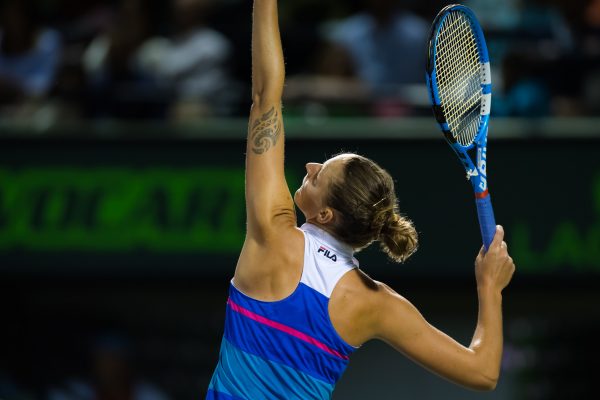 Very decent results and a wait for a big one. That’s how we might sum up Karolína Plíšková’s season so far. Just like two weeks ago in Indian Wells, the currently best ranked Czech player made her way to the quarterfinals in Miami, losing this time to Viktoria Azarenka in straight sets.

Plíšková didn’t have an easy way to the top eight in Miami. In her very first match she faced Makarova, with whom she had a negative 0-3 head-to-head record without a single won set. But this changed in Miami where Plíšková won in two tight sets. In the next round she played against Su-Wei Hsieh and it was a dramatic battle indeed. Plíšková won 7-6 in the third set.

Plíšková’s easiest match came against Zarina Diyas, whom she knows from the times when they both practiced at Štvanice tennis center in Prague. In this round-of-sixteen match Karolína controlled the pace of the game from the very beginning and her opponent retired in the second set, while the score was 6-2, 2-1 for Plíšková.

In the match for the top four in Florida, Karolína was stopped by the three-time winner of this tournament, Viktoria Azarenka of Belarus. The twenty-six-year-old Czech lost 5-7, 3-6 after losing her serve, otherwise her biggest strength, a total of seven times. “Unfortunately, I failed in this respect today. It wasn’t bad from the baseline, but my numbers on serve weren’t good at all,” Plíšková commented on her quarterfinal performance.

In the first set she managed to fend off three set points to close the gap of two breaks and tie the match at 5-5, but still couldn’t save the set. Early in the second she recorded two quick break backs, but still struggled on her own serve and was eliminated from the tournament after 96 minutes. “At 5-5 I was up 40-15. That’s where I should’ve won it and everything could’ve ended differently. Unfortunately I didn’t make it,” the big-hitting Czech regretted.

Plíšková, the current world number six, will now take a short rest before starting preparing for the clay season. In mid-April she is set to fight for the Czech team in the Fed Cup semifinals against Germany in Stuttgart, and only a week later she should play her first clay tournament this year at the same venue.