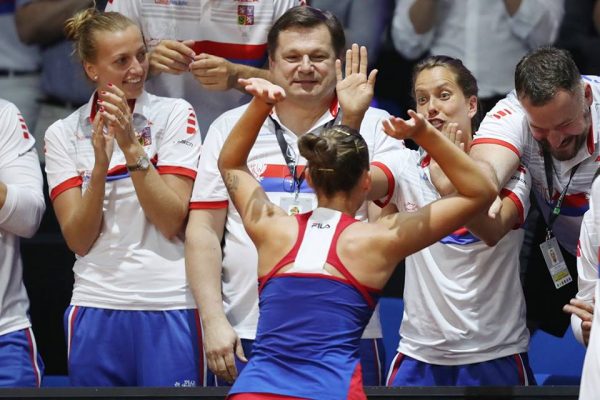 Czech Fed Cup players sailed through the Fed Cup semifinal in Stuttgart, Germany and advanced to the final. Petra Kvitová beat Angelique Kerber and won the decisive third point. The Czechs will thus fight for their sixth title in eight years.

The Czechs started their semifinal campaign with confidence on Saturday already, when Petra Kvitová and Karolína Plíšková won two points and secured three chances for their team to win the tie. The satisfied captain Petr Pála didn’t need to change the line-up for the Sunday’s singles and believed in clear and easy advancement to the final.

The opening Sunday match, however, didn’t really come off as the Czech team expected. Karolína Plíšková failed to confirm her Saturday’s form and became a victim of Julia Goerges’ precise serve herself.

Plíšková didn’t reach a single break point during the entire match and lost 4-6, 2-6 in less than an hour. With her win, Goerges gave her team a flicker of hope for a German comeback.

“It just wasn’t my match,” the Czech number one summed up. It was chalk and cheese compared to Saturday when she played an excellent match against Kerber. “She played great tennis and I didn’t offer anything extra, although my serve was good. I didn’t have many chances on her serve. Actually, not a single break point. She played an almost flawless match,” Plíšková said.

But the German hopes didn’t last long. Petra Kvitová showed another spectacular performance in the second Sunday’s singles match and defeated Kerber 6-2, 6-2 in only 58 minutes.

With the tie already decided, Kateřina Siniaková and Barbora Strýcová played their doubles match in Stuttgart against Julia Goerges and Anna-Lena Groenefeld. After the Czechs won the first set 7-5, the German players decided to retire from the match. The final score of the Fed Cup semifinal therefore was 4-1 for the Czech Republic.