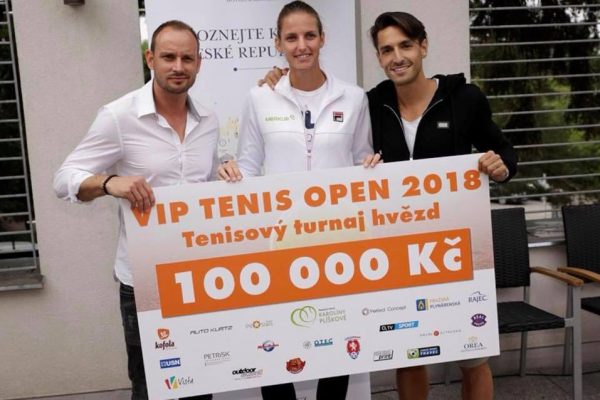 Karolína Plíšková has once again contributed to a good cause. In the Vista tennis resort in Motol, Prague she held a celebrity tournament and donated 150,000 CZK (almost 6,000 EUR) from her endowment fund for charitable purposes. Fifty thousand was donated to the best Czech female wheelchair tennis player Laďka Pořízková and one hundred thousand went to the Department of Pediatric Hematology and Oncology at the Motol University Hospital.

“It was already the third tournament held by our endowment fund and the list of participants was full of great names this time. And the quality of the doubles matches was excellent as well,” said Plíšková about the event, whose participants included football legends such as Karel Poborský, Pavel Kuka, Horst Siegl, Ivan Hašek, and Ladislav Vízek, as well as the ice-hockey superstar David Pastrňák.

The winners of the tournament were the football striker David Lafata with Petr Rejman. Karolína Plíšková’s endowment fund was founded last year and already managed to help several institutions. At the forthcoming Wimbledon, Plíšková will again send 100 dollars for each ace she hits during her matches.