Plíšková Ends Her Wimbledon Campaign in Fourth Round 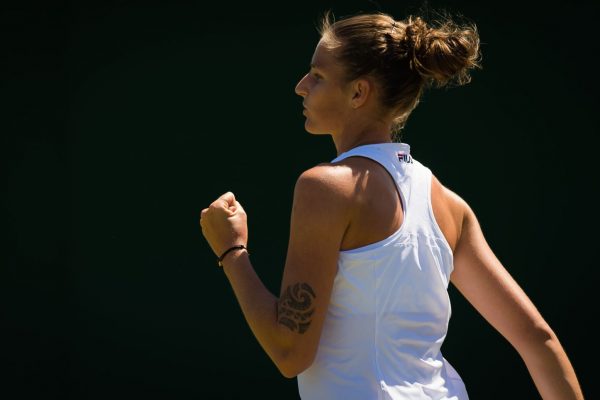 Karolína Plíšková is leaving London with mixed feelings. On one hand she reached the round of sixteen at Wimbledon for the first time in her career, but on the other hand she missed a big opportunity. She got into the match against Kiki Bertens too late and didn’t manage to turn the score around anymore. She lost against the Dutch player 3-6, 6-7(1).

She had lots of chances, but failed to capitalize on them. She converted just two out of ten breakpoints. She was also quite unlucky in the tie-break when two tight balls were decided by the Hawk-Eye in favor of her opponent.

“I had many opportunities but didn’t use them. Then I started playing too late and it wasn’t enough. She’s a quality player,” Plíšková admitted. Just like the other top-ten players at Wimbledon, she was defeated by a fearless outsider.

You again didn’t manage to play well from the very beginning, do you agree?
In the second set I didn’t play bad anymore, the level of tennis was good, but she’s a quality player. I had lots of chances both on my serve and on return, but converted only two break-points out of ten, which is definitely not enough. Sometimes she served well, sometimes I chose a wrong shot. Then she was excellent in the tie-break. It’s true that I started playing too late.

You didn’t really help yourself with your serve. How come it didn’t work for you?
I didn’t feel my serve at all. The opponent was standing too far, this unsettled me a bit. And when I hit a good serve, the ball was still in the rally. That’s what she loves. She was in her element and felt good.

Later in the second set you started outplaying your opponent and reduced her lead. Would you have been confident in the third set?
I started going for it from the half of the second set and had to play every ball myself. At that point I had the best feeling about my tennis from the whole Wimbledon campaign. But it wasn’t enough. She played on her standard level, I could’ve played way better. I would have been very confident in the third set, but it’s hard to tell the outcome.

Which feeling is predominant? A good feeling that you finally achieved more than just the second round, or a disappointment from the wasted chance for the quarterfinals?
The disappointment is big. I must beat a player like her when fighting for the quarterfinals in a Grand Slam. I’m trying to find positives that I managed to get that far for the first time here. Hopefully it’ll go better in a few days.

What else do you feel positive about?
It’s good that I won a few games in which I didn’t show my best tennis. I managed to turn the score around a few times, and especially the win against Buzarnescu was a very good one. I never stopped fighting.

Are you now looking forward to your favorite tournaments on hard courts?
I’m already thinking about them. Not that the grass courts would be my least popular surface, but I never played really well here. On hard courts I simply feel the best in general. My favorite tournaments are ahead of me. I’m really looking forward to playing there and I believe I’ll play well. My tennis in general has been improving. I had a few not so good tournaments, but I’ve turned a few matches around lately, which is good for my confidence. It’s been a strange year so far, so we’ll see what’s going to come..

Does the American environment suit you?
Definitely, I like warm weather. The conditions for tennis are therefore faster there, which suits me. I like the U.S. Open, New York City, it’s an incredible change from the other tournaments. Plus I have good memories of the event. (Note: 2016 final)

Are you going to have some time off now after Wimbledon?
Definitely. I want a bit longer time off. I’m definitely not going to deal with fitness or tennis now. I’ll take a rest, spend some time at home and will go for a trip somewhere. The second half of the year is going to be more difficult. I’ll recharge my batteries and get ready.