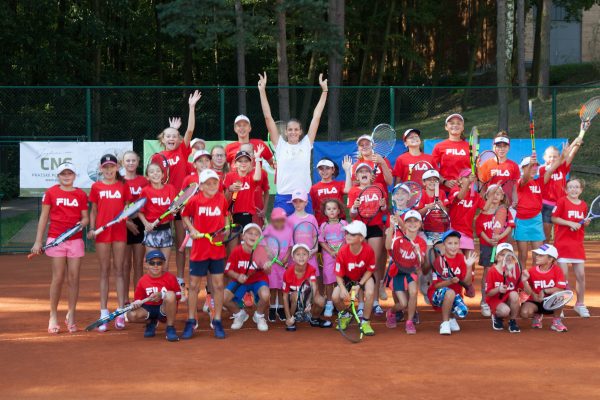 Karolína Plíšková along with her sister Kristýna found some time in their busy training schedule and spent a few days with children during the first year of Karolína Plíšková’s tennis camp, which took place from 26th to 29th July at the Vista Resort in Motol, Prague.

“It’s been great four days, the children charged us with positive energy and I was excited by their enthusiasm for tennis,” Karolína Plíšková said with joy after the end of the camp that was attended by forty children aged 4 to 15 years.

The children were divided into 10 groups based on their skills and they spent four hours a day on the courts under the supervision of the head coach Ondřej Dohnal. “Despite the extremely hot weather, everyone made the full four days in high intensity. I was positively surprised by the level of tennis,” commented Kristýna Plíšková.

“I would like to thank once again to all children as well as their parents for their participation and for the wonderful four days. We’re already looking forward to the next year,” concluded the camp organizer and the former world number one Karolína Plíšková. Full photo gallery from the camp can be found at Karolína Plíšková’s official Facebook page: https://www.facebook.com/pliskovakarolina/