Karolína Beats Kenin in Midnight Battle to Reach Round of 16 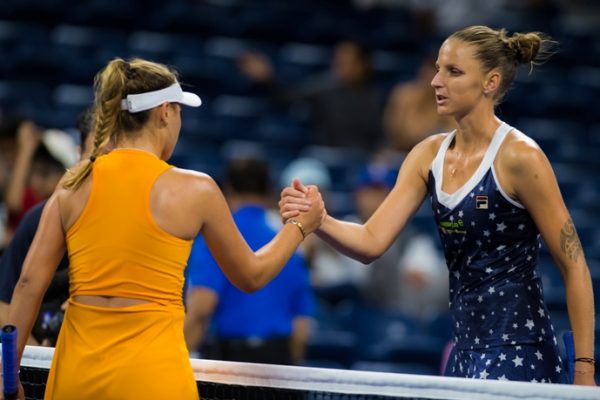 Just like in 2016 and 2017, Karolína will play in the round of sixteen at the U.S. Open. She has secured her spot among the best sixteen players after beating Sofia Kenin of the United States in straight sets, 6-4, 7-6(2).

But the night match against the nineteen-year-old Moscow-born player, who has been living in the United States since her early childhood, wasn’t easy at all. In both sets, Karolína had to turn the score around from 2-4 and in both cases she was better in the final parts of the sets.

The vividly playing Kenin broke Karolína’s serve at 1-2 in both sets but didn’t manage to hold her lead.

In the first set, hawk-eye decisions helped Karolína too – all her challenges were successful. During important moments the Czech player was also able to rely on her improving serve. She hit 11 aces in this match, which ended after midnight local time, and reminded everyone of her nickname – the Ace Queen.

Being down 2-4 in both sets, Karolína turned the first one to 6-4, while in the second she reached tie-break, in which she dominated thanks to her experience, winning it 7-2. “I’ve beaten opponents I was expected to beat, so I didn’t achieve anything amazing. But it’s not easy to get through the first few rounds. You have to eliminate girls who are often young and have nothing to lose. Playing against them is sometimes more difficult than against veterans and star players. I’m happy for being still in the competition and we’ll see what happens next,” Karolína said in an interview for Czech media.

In the round of sixteen she is going to face Ashleigh Barty of Australia, who has already eliminated two Czech players at this year’s U.S. Open – Lucie Šafářová and Karolína Muchová.