Karolína in the Final in Tokyo after another Three-Set Drama! 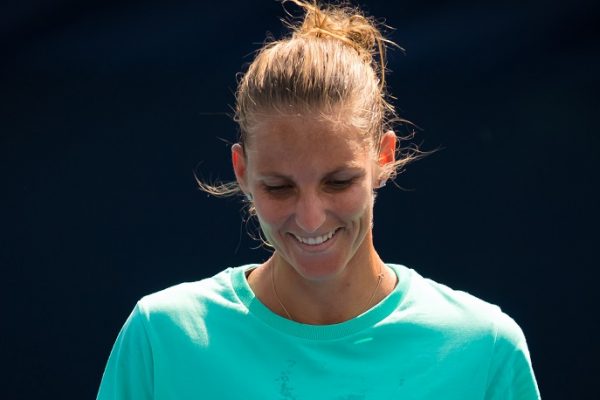 Karolína is going to fight for the tournament trophy in Tokyo! She has won the semifinal battle against Donna Vekić of Croatia in three sets 6-2, 4-6, 6-3. On Sunday she is going to face the reigning U.S. Open Champion and the local hope Naomi Osaka.

After the dramatic three-set battles with Daria Gavrilova and Alison Riske, this time it long looked like it was going to be a much more one-sided match. Karolína clearly dominated at the beginning. She hit seven aces in the opening set, lost only four points before the score was 4-0 and grabbed the set after 30 minutes. Up until 3-1, the second set was absolutely one-sided as well. But then came the first lost serve, as many as six double faults within a short time and the Croatian was back in the match and tied the score.

“I think Donna played really well. She defeated some very strong players here. I expected it to be a tough match, although for a while it looked like I wouldn’t need to spend two hours on the court this time,“ Karolína said after the match.

In the dramatic third set, the key moment was Karolína’s converted second break point at 2-1. After that, Vekić was already under pressire and Karolína served very well again and managed to hold the lead. The last point came with Vekić on serve trying to save the game from 0-40, but she couldn’t fend off the third match point anymore.

“I don’t think I played excellent tennis today. I was tired from the previous matches. But I’ve won, that’s important and it means I still have a chance to get better again,” Karolína explained.

Following her triumph on clay in Stuttgart in April, this is going to be Karolína’s second final in 2018, this time on a hard court. She is going to face the home star Naomi Osaka, who eliminated Camila Giorgi of Italy in the second semifinal. “The last match is always the toughest, but at least you know you can give your all in it,” said Karolína. “But I’m really glad, because you don’t get to play in the final every week. It’s been an amazing week for me – I’ve never been in the final in Japan, so I must enjoy it.”