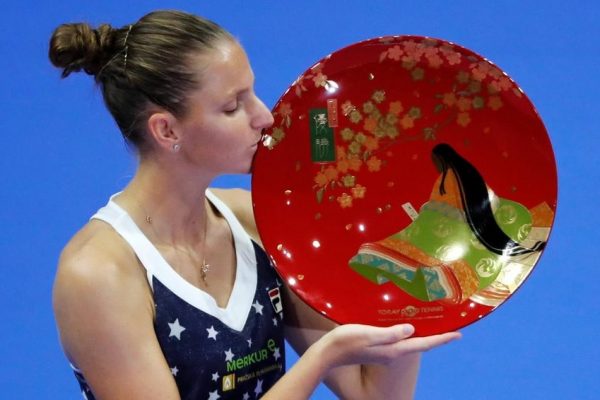 Karolína has won her 11th WTA Tour title! At the Toray Pan Pacific Open in Tokyo she won her last match as well, beating the home player Naomi Osaka 6-4, 6-4. Mainly the end of the match, when she won the last 11 points, was impressive and after sixty-four minutes she could start celebrating.

On her way to the title Karolína fought really hard in Tokyo. All of her first three matches at the tournament were three-setters and she managed to win only the last one against the reigning U.S. Open Champion in straight sets.

“This arena is really amazing and I had so much fun here during the week. I’ve been to Japan several times in the past few years and I believe I’ll come back again next year,” Karolína said during the final ceremony after receiving the traditional red bowl. Just like when she triumphed in Stuttgart earlier this year, she was again accompanied on the court by her father Radek Plíšek. “I’d like to thank him for his support. We have already won our second title together this year,” Karolína added.

The final match was an encounter of two players with great serve, but it was Karolína who managed to use her biggest strength better. In the entire match she didn’t let Naomi Osaka have a single break point, while converting both of her break-point opportunities herself.

In the first set she caught the home player unawares in the fifth game, when she went up 3-2 and managed to lead the set to a successful end. In the second set she showed the above-mentioned series of 11 consecutive points won including two aces. During the whole match Osaka won only 12 points on return.

The win in Tokyo helped Karolína rise to the eighth place in the Race To Singapore rankings and increased the chances for her appearance at the WTA Finals.