Dad Brings Calmness and Second Title in 2018. He Says What He Sees and Is Often Right 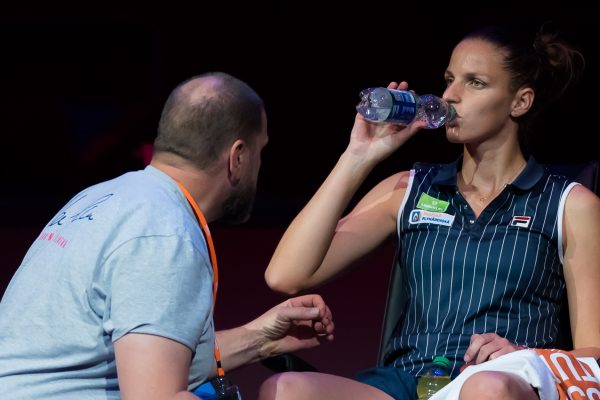 The organizers of the Chinese tournament therefore sent a private jet for both finalists, but in the end Karolína flew alone as Naomi Osakaová withdrew from the event due to fatigue. And shortly after her arrival to China, Karolína took part in a big podcast interview with the WTA official website.

She spoke for more than ten minutes about the effect of changes within her team, about how she enjoyed her dad’s presence in Tokyo, as well as about her goals for the rest of the season.

Here is the transcript of the full interview.

First of all, congratulations on a very hard fought week in Tokyo to win your second title this season. What do you think was the key this week?

Thank you. I had a lot of tough matches. I was a lot of hours on the court. I was also practicing six days before the tournament. I think that was the key, that I really got prepared because it was indoor. The stadium was a little bit different than we are used to the other years before. They moved, so it was a little bit different but I got used to it.
I was fighting from my first match when I was really losing 4-1 in the third set and then the next match I had some match points down. I just really wanted to try to fight this week to get some victories and in the end, the easiest match was in the final.

You have now won your last five finals. The last one you lost was the 2016 U.S. Open. So it’s been over two years since you’ve lost. What is it about finals that brings out some of your best tennis?

I think everybody just tries to play their best tennis in the final and you know you are playing the best player from the tournament in the final. You know you have to put everything. It’s also the last match of the tournament, so you know you travel to a different tournament, or you go home. So it’s just worth it to put everything you have, all the energy.
I’m just happy that I was always able to find it in the final. It’s not easy to get to the final but it’s really worth it to be there, to fight for the title, because it’s still a different story to be the finalist and to be the winner.

The first title you won this season was back on the clay in Stuttgart. So it’s been a while since we had seen a result like this from you, but it also felt like this has been coming. It really felt like midseason things maybe started to click and confidence started to grow. When do you think that happened and what do you think has been the key to that?

I felt like after Wimbledon I’m starting to play a little bit better on the hardcourt. Obviously it’s my favorite surface. I had some tough losses also from some match points in Cincinnati, and some tough ones. There was Bertens, some players which are just tough for me to beat, but I was feeling like I played quite good tennis. Even in US Open, I made quarters. I just felt like it’s improving, it is going well.
So I was pretty confident coming into this tournament, especially because it’s indoors. I like indoors, Stuttgart was also indoors, so the conditions for me are perfect. I feel happy on court, which is important for me. I’m enjoying.
Normally I was not really looking to Asia, but right now because I’m still fighting for Singapore, I just said I’m going to give it a try and try to enjoy here a little bit more. I know it’s the last big trip of the year, but I just want to put everything that I have left and give a chance to get to Singapore.

Your entire game revolves around your serve. You’ve said before that if you’re serving over 65 percent first serves in, you’re feeling pretty good. You were somewhere around 81 percent in the final in Tokyo. How much work have you put into that shot over the last few months?

I did a little bit, but not really that I would spend an hour on court by just going to serve, but it just comes naturally with having matches. The serve just automatically improves.
But I think this was my best serving match so far in my life, to have more than 80 percent serves, I think I never have done that. Maybe in one set but not in a whole match and not in the final, and not against such a good player. But like I say, like if there’s the percentage, if I can hit a few aces, there’s a big chance that I am winning the match.

When you won Stuttgart your dad was in your box. When you won Tokyo your dad is there. Is he a good luck charm for you?

I tried to change, so he’s going like five or six tournaments with me every year because my coaches, they’re from now different countries. Even before, they had families. So we just tried to go a few tournaments every year.
For me it’s a nice change just to be with my dad, to not really be with the coach. Everybody’s trying to get the best out of me, but this is dad. There is a little bit different relationship with him. Also, we don’t just talk that much about tennis, only the simple things we say before every match. He knows basically all the players because he sees me even if he’s not there, he’s watching all the matches on the internet. He knows me as a person, so he knows what I need, if to be quiet or just to get motivated a little bit more. That’s the balance we always find together.
So I think it’s not a surprise that I’m winning the tournaments with him because I just feel calm. But also, on the other hand, I don’t think this is possible every week. So I think it’s the balance that I just found, that I’m changing a little bit the people. I think this is working with me.

What is his personality like when he comes out for the on-court coaching timeouts?

I think we are pretty similar, so I think he is very calm. And for me, he’s never looking nervous, so I never feel like he would be nervous for me or from the matches if I’m winning or losing. He’s still the same and doesn’t matter which score I call him, he is just still pretty calm and quite positive.
He always takes the tablet, the SAP tablet, because of the serve. He’s always saying that the serve is the most important in tennis. And obviously the return. So we always try to check this. And then it’s about a few things, like to be positive to just maybe be more aggressive.
Now he told me, ‘Come on, don’t be scared.’ So I said, Dad, I’m not scared (laughs). And he was like ‘No I didn’t mean it this way, just go with more in the court. You are so far from the from the baseline.’ So just a few things which he sees from his eyes. It’s nothing really to do something with technique or tactics, really, but what he just sees, what he feels, and a lot of times he’s right.

Here you are reuniting with Renee Stubbs. What have you talked about for the next few weeks and what the two of you plan to be working on.

Yeah. Poor Renee. She was here from Thursday morning (laughs). She came from States. I’m happy that she’s here because it’s going to be a different change now for me. I had Conchi (Conchita Martinez) in New York. So now she’s going to be around those few weeks here in China and then maybe at the end of the year as well. I saw her, we had a beer last night in my room.
I think she’s a pretty positive person, so I’m just happy that she’s around here. I’m going to need it this time to be positive and don’t think too much about points and what is happening. She’s really professional and she knows all the players because of her job commentating and because she was playing, so she knows pretty much everything about everyone. Too much, sometimes (laughs).
I also have my Spanish physio so my team is now international. So far everything is working well.

It seems like the positivity is surrounding you completely. How big has that been as a change for you?

I think this was for sure something that I was looking for and what I needed, especially after Wimbledon, after the first half of the year. I felt like I need positive people because I’m too negative forhaving a negative team. So that’s why I took those people that’s why I choose this team and I feel happy. That’s the most important for me now.
Sometimes you can even win matches just by being happy, just by enjoying the matches and the tennis and also the practices. Everybody has a day when you don’t want to go practice but it’s so much easier when you enjoy. So that’s about it now.