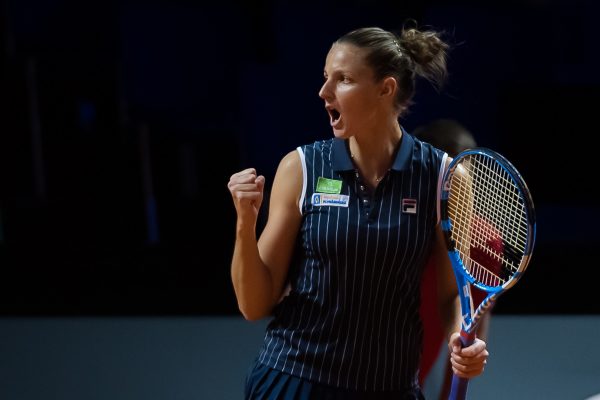 Karolína started the WTA Finals perfectly. In her opening match in the White group she defeated the last year’s winner, Caroline Wozniacki of Denmark, 6-2, 6-4.

Karolína played her first match in Singapore with great self-confidence and she was very strong especially on return. She played aggressively and very accurately against Wozniacki’s serve, which kept putting the Dane under pressure. “I felt quite good on the court, so my tennis wasn’t only about my serve. I think I showed quite a solid performance. And I also think that Caroline was a bit nervous as it’s always tough to defend a title,” Karolína said after the match.

The opening set was decided between the third and fifth game when Karolína broke her opponent’s serve twice to go into a 4-1 lead. The next game was crucial too. Wozniacki had two break points but Karolína responded with four unanswered points and won the set 6-2 during her next serve.

The second set started off well too and Karolína continued in her convincing performance. She broke her opponent in the very first game already. But as time passed, Wozniacki found her rhythm and got encouraged by a saved break point at 1-3. She was keeping the pace for a long time.

“Matches against Caroline are always tough. I remember that last time we played, the first set lasted over one hour and I even had a set point,” Karolína said. “That’s why I also believed that I have a chance. Last year we played a really good match and today I tried to play my best tennis,” she explained.

In the dramatic ending Karolína had two match points at 5-3 against Wozniacki’s serve but the Dane managed to fight off the end and had two break points herself in the next game. But then Karolína again won four straight points and finished the game in style – with an ace. “I’m really satisfied with my today’s performance and I really enjoyed it on the court,” Karolína added.

.@KaPliskova takes the win in style!