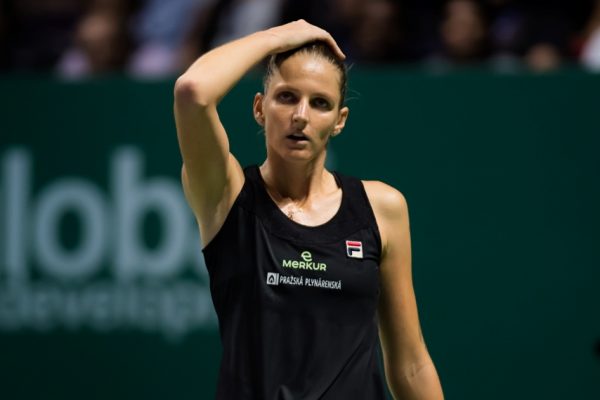 The result of Karolína’s second match in the White group at the WTA Finals in Singapore isn’t what she hoped for.. She lost against the Ukrainian Elina Svitolina in three sets 3-6, 6-2, 3-6, but remains in contention for the advancement to the semifinals. Both players showed one of their best performances this season in the match.

The development of the match was perhaps prefigured by the third game already, in which Karolína had six break point opportunities to break her opponent’s serve, but the tenaciously playing Ukrainian managed to save them all. This boosted Svitolina’s confidence and after breaking Karolína’s serve with a love game at 2-3, she served out the opening set.

Before the second set, Karolína asked for a consultation with her coach Rennae Stubbs and her performance started to culminate. She was confident on serve and managed to win long rallies, which were Svitolina’s domain until then. Plus she included more net approaches into her game and deservedly won the set 6-2.

But the third set didn’t start well and two lost serves gave Svitolina a big advantage. Although Karolína fought back and managed to reduce the gap from 0-4 to 3-5, at the decisive moment she again lost her serve and hence also the entire match.

On Thursday, Karolína will face the fellow-Czech Petra Kvitová and a win should grant her a spot in the semifinals.