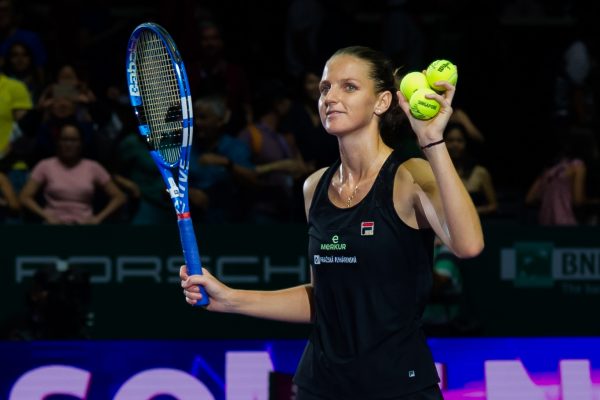 Karolína has secured a spot in the WTA Finals semifinals after beating fellow-Czech Petra Kvitová 6-3, 6-4 in the third match of the White group. Following her win in straight sets she doesn’t need to wait for the result of the last White group match.

Karolína started her third match in Singapore impressively. After breaking her opponent’s serve twice thanks to her active tennis she quickly went up 4-0 and it seemed the first set would be over in no time. But Petra Kvitová didn’t give up, came back from 0-40 in the fifth game and won her first game, converting the fourth break point. Then she won another game despite being down 0-40 and the match started turning into a drama.

Karolína, however, controlled the end of the set, focused on her serve and won 6-3. “I knew that I play really well this year when a match goes into the third, so after winning the opener I believed that I can win this match,” said Karolína.

The lost first set meant the end of Kvitová’s semifinal hopes. However, perhaps having this in mind, she started playing carefree tennis and built a 3-0 lead. “She was then more relaxed, so she managed to hit some winners and played some good rallies, plus she served better,” thought Karolína.

But then Kvitová started making mistakes and Karolína achieved 70% of points won on her opponent’s 2nd serve. “I tried to change the rhythm and pace of the game. I believed that I had weapons to succeed against her. And I think that I felt better on the court today than her,” pondered Karolína.

Then came a turn in the score to make it 5-4 following three converted break points and subsequently Karolína finished the match on serve with her second match point. “This win is really important. Plus the fact that I advanced to the semifinals after beating Petra Kvitová is just special,” said Karolína.

Karolína will find out her opponent for the semifinals on Friday, based on the results in the Red group.