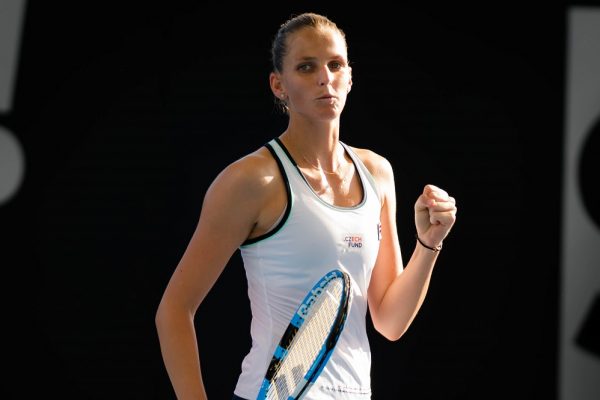 Karolína has reached the semis in Brisbane again after defeating the home player Ajla Tomljanović in three sets 6-1, 1-6, 6-1 on Friday.

The first set was a smooth ride! Everything Karolína touched turned to gold, she controlled the play with the help of her serve and hit 8 aces. The set was over after 27 minutes.

However, she lost the second set as easily as she won the first one. The Croatian-born Australian quickly broke Karolína’s serve twice and went up by 5-0. “She improved a lot in the second set and played very fast. On the contrary, I was a bit lazy after the first set. Alja started playing more aggressively and also served much better,” Karolína commented after the match.

But Karolína warded off the crisis, avoided a bagel in the second set and entered the decider much more focused. Moreover, she started hitting strong and accurate strokes and Tomljanović couldn’t keep up. In the end, the three-setter lasted only 85 minutes.

“It was a very strange match, but the beginnings of each set decided, they were very important. Perhaps I’ve never played a match like this, but I’m happy I’m in the semis here again,” Karolína said.

She can now start getting ready for the semifinal against Donna Vekić of Croatia, who plays impressive tennis in Brisbane and who has already eliminated Magdalena Rybáriková, Kiki Bertens and Aliaksandra Sasnovich from the tournament. “I think she’s playing well here,” said Karolína about her next opponent. “I saw a bit of her today’s match and we also met before the tournament. Last time we played against each other in Tokyo and it was a three-set match. And a semifinal as well…”