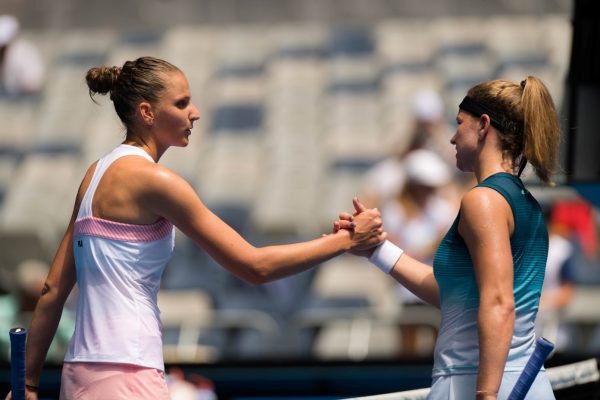 Karolína started the Australian Open with a win, beating fellow Czech Karolína Muchová 6-3, 6-2 in the first round in Melbourne Arena.

Karolína had the match against the Czech qualifier under control. She used her very first opportunity to break Muchová’s serve and despite her opponent immediately answered with a re-break, Karolína won yet another break in the following game and went into a decisive lead.

Karolína won the first set 6-3, but the crucial points of the match came early in the second set. Despite fending off four break points Muchová lost her serve twice in dramatic game endings and Karolína went up by 4-0. She then controlled the rest of the match and managed to serve it out to advance to the second round.

“First rounds are often tricky, so I was very alert. But I knew she likes net approaches and plays backspins and that if I play fast and don’t let her play her tennis, she’ll have trouble,” Karolína said after advancing to the second round. “It seems like I’ve been a magnet for Czech opponents at Grand Slams lately. While I’ve been successful against them so far, if I had had a choice I wouldn’t have probably picked them,” she commented on her encounter with the fellow Czech.

In the second round, Karolína will face the American Madison Brengle, who defeated Misaki Doi of Japan in straight sets 6-4, 6-0.