Karolína Sails Past Muguruza into Quarterfinals 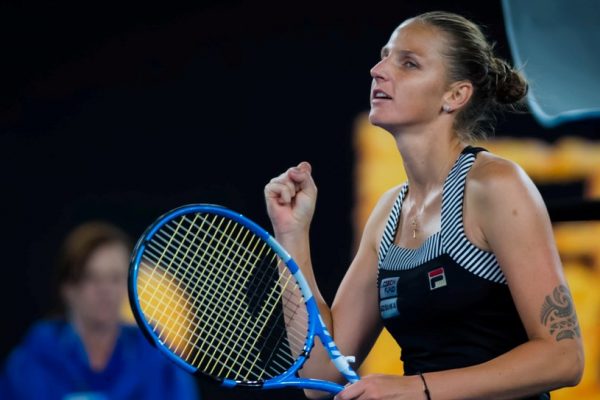 Just like in 2017 and 2018, Karolína will play in the quarterfinals at the Australian Open. She won the match against Garbiñe Muguruza of Spain clearly 6-3, 6-1 and advanced among the top eight players of the tournament in about an hour.

Despite being the first one to lose her serve in the match, soon it was clear a turn in the score would come. After losing her serve Kája responded by breaking her opponent back in the very next game and while she managed to hold her serves safely afterwards, her Spanish opponent had to fight for each serve fiercely.

“It was a bit nervous at the beginning, but then I started playing better. I’m improving match after match,” Karolína admitted.

The first set was then decided by the second break point at 3-5, when Karolína hit a great shot right into the corner of the court, which the Spaniard challenged with a hawk eye, but the technology confirmed the ball went in. Immediately afterwards Karolína added a love game, closed the set and started dominating.

The second set was a one-sided matter. Muguruza kept losing her serves and gradually resigned. And when she hit good shots from time to time, Karolína was quick enough to catch them and counter-attack.

The match ended after 61 minutes and Karolína confirmed her success rate against Muguruza. She won the eighth of ten head-to-head matches, this time allowing just four games to her opponent.

“Everything is working well,” says @KaPliskova 💯

“I’m happy I could play at the Margaret Court Arena for the first time this year. It’s my favorite court and I believe you’ll come to support me here for my next match too,” Karolína asked the audience and received a big applause.

In the quarterfinal she will face Serena Williams, who eliminated the world number one Simona Halep: “I went to watch a bit of the match, it was a highlight of the night. It’s going to be tough, of course, Serena is a big champion.”

Australian Open, Melbourne, round of 16: