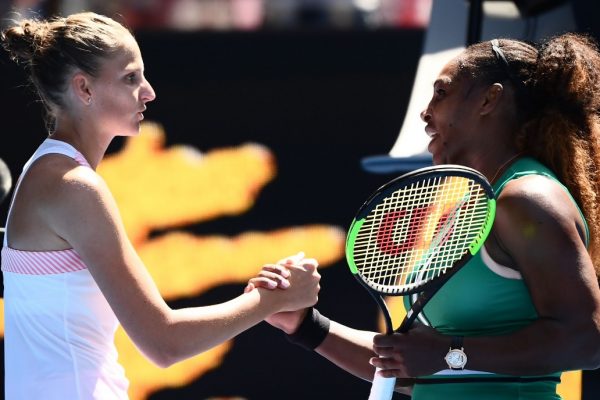 Karolína will play in the Australian Open semifinals for the first time in her career after eliminating Serena Williams in an epic battle. Despite being 1-5 down in the third set she managed to turn the match around by winning six consecutive games and saving four match points along the way!

It was a battle that will perhaps become one of the most memorable ones not only for Karolína, but possibly also for the Grand Slam events. The tennis legend, Serena Williams, was up 5-1 in the third set and was serving on a match point. Still she lost the match. Karolína didn’t give up and turned the match around.

In the opening set Karolína could fully rely on her serve. She kept her first serve percentage around 80 per cent and won the key points with her serve as well. And since she was up by a break from the third game already, she managed to win the set, hitting an ace on the set point.

In the second set she was again the first one to capitalize on a break point, but was broken back right away, losing her serve with a love game. She perhaps reduced the strength of her shots, hit the tape, but most importantly Serena started playing great tennis. The American turned the score as well, breaking Karolína’s serve in the 10th game of the second set.

The third set then looked clear. Serena found her rhythm and started dominating on the court with her aggressive play. At 5-1 she was serving for the match. But on the match point, in what was probably the key rally of the match, Karolína hit an excellent forehand and averted the end. Moreover, Serena turned her ankle during the maneuver, which probably distracted her slightly.

The next six games then went to Karolína, who literally rose from the ashes, and despite she had to fend off three more match points at 4-5, she managed to turn the match completely.

“I’m so proud that Karolína doesn’t give up. We know that Serena might have injured her ankle, but still she kept playing very good and aggressive tennis,” the coach Conchita Martínez commented on the match.

“No, my ankle was OK, maybe I’ll just feel a bit of pain tomorrow,” Serena Williams didn’t complain. “It was Karolína who played incredibly in the key moments and hit her shots perfectly,” the American admitted her loss.

“I was almost in the locker room, but now I’m standing here as a winner…” Karolína almost couldn’t believe when talking to the audience after the thrilling match. “I know Serena very well. And the fact that she cried at the end shows how much it meant to her. She improved in the second set and played more aggressive, whereas I became too passive. Unfortunately it continued in the third set as well, but I kept trying and waited for even a small chance. And it came eventually. Serena was slightly distracted at the end after all and I managed to get back into the match and win it in the end,” she commented on the key moments of the match.

In the semifinal Karolína will face Naomi Ósaka of Japan.