Karolína: Australian Mission? No Reason to Be Disappointed 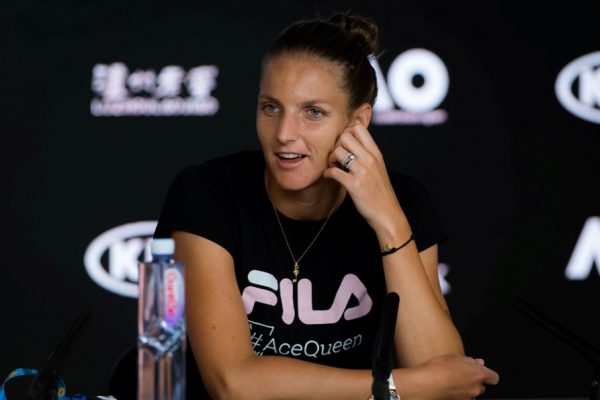 Semifinal at the Australian Open Grand Slam and a triumph in Brisbane. Plus advancement to the 5th position in the WTA World ranking. That’s Karolína Plíšková’s record at the start of 2019.

A total of 10 victories out of 11 matches. The only loss early in the new tennis season came in the semifinal in Melbourne against the future winner and current world No. 1, Naomi Ósaka. No wonder then that Karolína evaluates the start of the new year positively.

“I feel great. Both regarding my play and about how my team works. Everything we worked on together, went well. I have no reason to be disappointed,” Karolína said at a press conference following her last match.

Karolína took the loss against Naomi Ósaka well: “I’m not disappointed by my performance at all. I lost, but there was nothing I would do differently. Naomi played an excellent match, perhaps one of the best matches in her life. She hit so many winners and so few errors! I couldn’t have done much more, it wasn’t always in my hands. She also served amazingly. She actually didn’t do anything wrong. She deserved to win.”

Karolína’s match against the tennis icon Serena Williams became a hit at the Australian Open too. An epic battle, which Karolína managed to turn from 1-5 in the third set, was perhaps the entire Grand Slam’s most beautiful match.

But perhaps this very emotional match in combination with the rapidly progressing tournament and the encounter with Naomi Ósaka, was the reason for elimination right before the top. “Of course it was difficult, a day off would have probably helped. Not only physically, but also emotionally. On other occasions I am used to playing three matches in three days, but at this stage of the tournament it’s different. Maybe I lacked a bit of energy at some moments. But that’s the way it is. There’s no need to deal with that now. I won in Brisbane and reached this stage here,” Karolína took the semifinal in Melbourne as a fact.

Her stats at the Australian Open resemble a gradual way up. She’s getting closer to the dreamt-of final or tournament triumph step by step. The first round in 2013, second round a year later, third round in 2015 and 2016. Then came two quarterfinals in 2017 and 2018 and a semifinal this year. “Even if I lost earlier here, I would’ve still perceived it well. Only the two best always reach the final. I’m sure I’ll have a chance at other Grand Slams,” said Karolína.