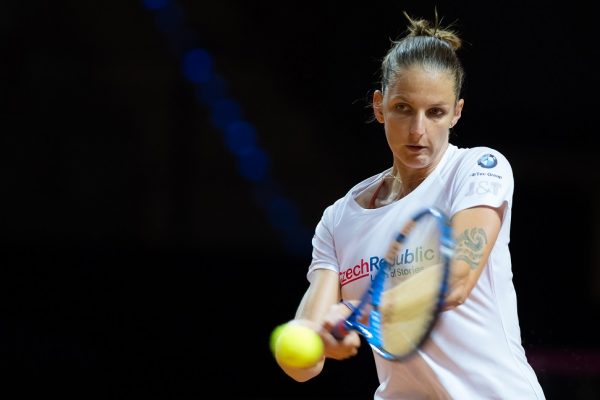 Karolína is the number one of the Czech Fed Cup team for the quarterfinal tie against Romania and after the Friday’s draw she also knows she will open the tie. Mihaela Buzarnescu will be her opponent on Saturday.

Still Karolína was a bit surprised by the Romanian nomination. “I thought they would nominate Niculescu to play against me,” Karolína admitted. Because she has a negative head-to-head record (0-2) with the very experienced right-handed player. But the match against Buzarnescu might be a more interesting experience for the fans. “It’s going to be a nicer match. She’s a good player, a left-hander, she’s also good in doubles,” Karolína said at the press conference.

After the Australian tour the Czech number one as well as other players have to get used to the transition to indoor courts. “It would have been nicer outdoors, but my record is good indoors as well. Last year I won two indoor events,” said Karolína, who will be in Ostrava with her Spanish coach Conchita Martínez.

Apart from Karolína, the team captain Petr Pála also nominated Kateřina Siniaková for the opening singles. She will face the recent world number one Simona Halep on Saturday.