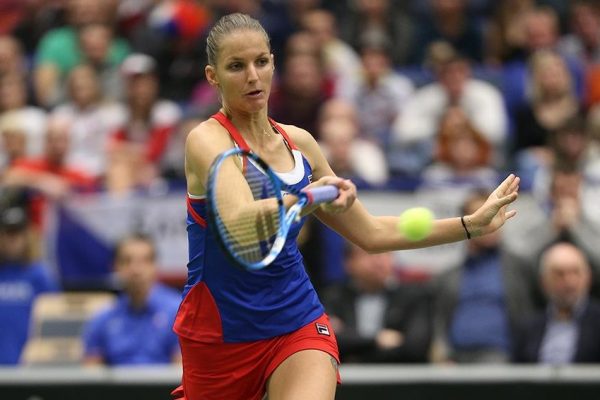 The score of the Fed Cup quarterfinal between the Czech Republic and Romania is tied at 1-1 after the first day. Karolína won the point for the Czechs with her win against Mihaela Buzarnescu 6-1, 6-4.

The first set was exceptionally good by Karolína. Despite having to fight really hard for her serve she managed to go into a 5-0 lead. Her tennis was accurate and aggressive and included many net approaches.

“The first game was important and I calmed down a bit. Then it was OK already,” she said after the match.

The second set was significantly more dramatic and both players had to fend off break points early on, but Karolína was always able to rely on her serve. She held her serve with the help of six aces and at 4-4 she capitalized on her second break point, after which she served the second set out successfully and ended the match.

“The nerves in Fed Cup are slightly different from regular tournaments. I didn’t play in the previous tie, so I was a bit nervous at the beginning. I think I was better but somehow couldn’t win the games in the second set. I’m glad it came out like this,” the Czech player added in an interview for the Czech TV.

In the second match Kateřína Siniaková lost 4-6, 0-6 to Simona Halep, so the tie between the Czech Republic and Romania is levelled at 1-1 before the second day.