Battle with Halep Ends in Loss, Romania through to Semis 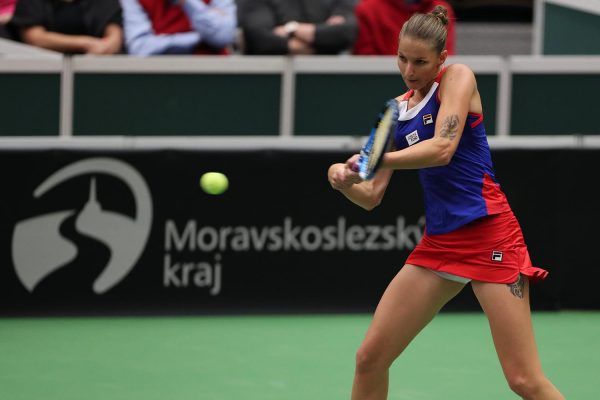 Karolína lost the Fed Cup singles match against Simona Halep in three sets. The dramatic battle of two former world number ones lasted over two-and-a-half hours, but in the end it was the Romanian who celebrated.

The match against the current world No. 3 didn’t start well for Karolína. She lost her very first serve, but countered in the same way. But the end of the opening set was again under the Romanian’s control, who converted her second break point to go up 5-4 and subsequently confirmed her break on her fifth set point.

In the second set Karolína was already up by 4-1, but Halep managed to level the score at 5-5. In the end, after two games of long rallies, Karolína managed to outplay her opponent and sent the match into the third set.

Unfortunately, in the decider it was Halep who built a significant lead. Although Karolína managed to break her opponent’s serve and reduced the score from 2-5 to 4-5, she had to accept a loss in the end.

“I don’t think I played bad tennis. Simona was just a bit better today,” Karolína said after the match.

“She doesn’t make that many mistakes, so I tried hitting the ball hard today. It’s a matter of course that you make mistakes then. But I don’t think I made too many of them, taking into account that we played almost three hours,” she added.

In the fourth singles match of the tie, Kateřina Siniaková overcame Mihaela Buzarnescu 6-4, 6-2 and the doubles was to decide. However, in the doubles the pair Siniaková/Krejčíková lost to the Romanians Begu/Niculescu 1-2 and Romania advanced to the semifinals.

“I’d like to thank to all the fans in the arena as well as to those who kept their fingers crossed in front of the TVs. We fought really hard, but the Romanians were better this time,” Karolína sent a message to the fans.