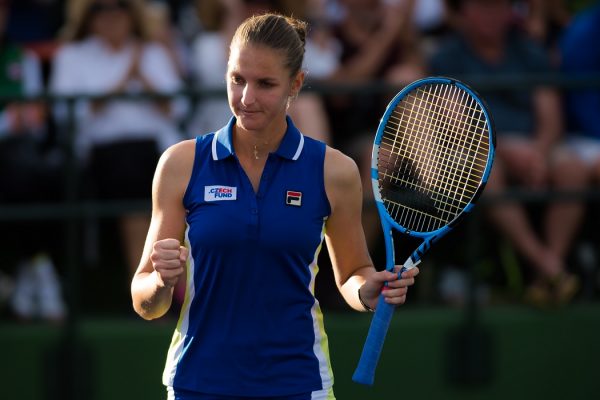 Karolína entered the singles tournament at Indian Wells successfully. Despite losing the opening set against the Japanese Misaki Doi she clearly dominated the next two sets and advanced to the 3rd round after 103 minutes.

In the first set Karolína faced a small crisis and after losing two consecutive serves she let Doi go up a break. But shortly afterwards she tied the score again and the set went into a tie-break, where Misaki Doi played excellent tennis and deservedly grabbed the first set.

However, the match changed rapidly in the second set. Karolína started hitting her serves, played very confidently on return and built a 5-0. Only then did the Japanese win her first game and tried to get back in contention, but lost the second set quickly. Karolína ended the set in style with an ace on her third set point and kept on dominating.

The first game of the third set was very important for the further development of the match. Karolína managed to win it after a tough battle and managed to go up by 4-0 a while later. Misaki Doi then wasn’t able to come back and Karolína finished the match with another beautiful return after one hour and 43 minutes.

In the third round Karolína will face Ysaline Bonaventure of Belgium, who surprisingly eliminated the 28 seed Donna Vekić in three sets.