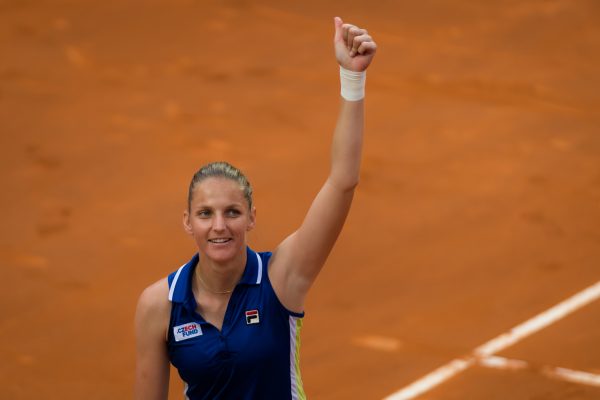 Karolína is in the final of the Internazionali BNL d´Italia tournament. She won the Saturday early evening semifinal against Maria Sakkari of Greece in straight sets 6-4, 6-4 and paid her opponent back for the last year’s bitter loss.

But she didn’t start the first set well. She lost her second game on serve already with a love game and had to turn the score around. But she succeeded later in the set after winning four consecutive games. She used two of the three offered break point chances and won the set 6-4 in 39 minutes.

The second set was long tight and Kája had to strongly defend her serve twice. But she fended off all break points at 0-0 as well as 2-2 and led the match to a successful end. At the very end of the match she definitely broke her opponent’s resistance with eight rallies won in a row.

“I still don’t feel I’m playing my best tennis. The best match here was definitely the quarterfinal against Vika. That had a really high level,” Karolína commented on her semifinal match against Maria Sakkari.

She was very pleased with the advancement to the final though. “But of course I’m supper happy. Before the tournament I didn’t feel I was playing any great tennis. But I’m in the final. Especially at this tournament it means really a lot to me because I never played well here,” she added.

In the final Karolína will face Johanna Konta of Great Britain, who defeated the Dutch Kiki Bertens in three sets in the semifinal.

Karolína is also the first Czech in 29 years to play for the trophy at this traditional and prestigious clay event. The last one was Hana in 1982, who lost to Chris Evert.