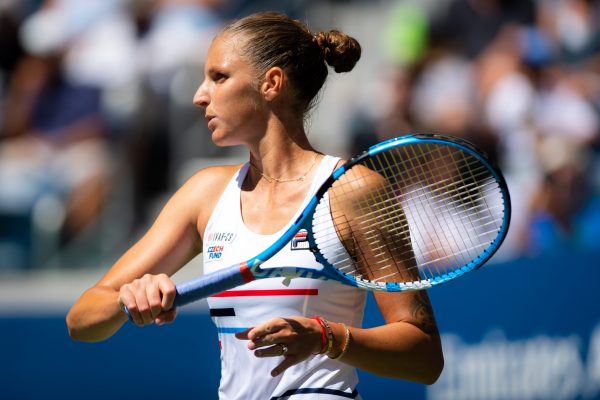 Karolína is the first player at this year’s US Open to reach the third round. In the opening match of the 2nd round she defeated Mariam Bolkvadze of Georgia in straight sets 6-1, 6-4. Due to the rainy weather in New York City the match was played under the closed roof of the main Arthur Ashe arena.

The program of the third tournament day was disrupted by weather conditions, but playing under the center court’s roof was possible, so Karolína could demonstrate her maturity and quality tennis against the unknown opponent from Georgia.

Although on Monday Mariam Bolkvadze beat Bernarda Pera of the United States to record her first-ever win against a top 100 player, this time she resisted only for a small part of the opening set against the world number three. When Kája found her rhythm and confidence in her shots, she quickly went from 1-1 to 6-1 and grabbed the first set.

The second set was noticeably tighter, but it was decided by a re-break in the very long fifth game, when Karolína broke her opponent’s serve on her fourth break point and managed to hold her own serve until the end of the set. She posted two love games in the process and hit a total of nine aces during the match.

“I was a bit less nervous than in the first round. When I’m enjoying my game I play better,” Karolína said at the post-match press conference. “When you win a good match, it doesn’t matter what waits for your in the next round. I simply feel better and believe that I’m improving,” she added, paying a compliment to her opponent as well: “I think that in the second set Mariam played quite well. And if it was her first Grand Slam appearance ever, then I’m sure she’ll play even better.”

In the third round Karolína will face the winner of the duel between Ons Jabeur and Aliaksandra Sasnovich.