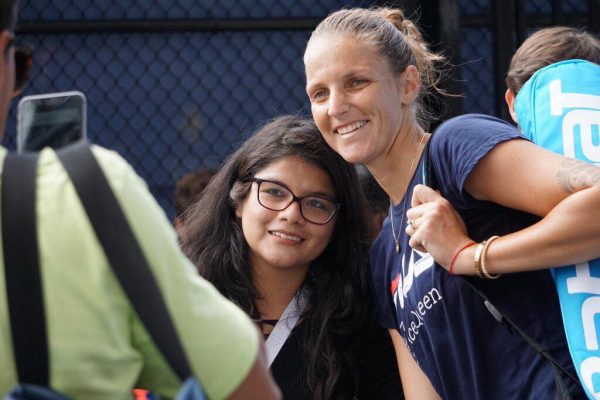 There are meetings that can make your day and remain in your memories for the rest of your life. And such was the meeting when perhaps Karolína’s most loyal fan came to see her in New York. Fabiola Aviles Merino lives in the Mexican city Xalapa and she decided to make a trip to the US Open. She spent incredible 32 hours on her way!

From Xalapa by bus to Mexico City, then a flight to Chicago. And then 20 more hours to New York City and with a public transport to the Flushing Meadows. You would think twice about making such a journey, but this girl had her dream.

“I’m from Mexico and it’s quite far from the Czech Republic. It always seemed impossible to me to see Karolína with my own eyes. There are no big tournaments in Mexico, so I always watched Kája only on TV. Until this year. A chance to visit my brother in Chicago came my way, so I saved some money, considered it for a while and then set out for the US Open. My brother wasn’t really excited about that, but I was saying to myself: When else will I have another opportunity?…” the twenty-six-year-old Fabiola smiles.

So she bought a bus ticket and traveled almost 1500 kilometers eastwards. “I arrived on Monday shortly before the first match against Tereza Martincová. You know, it was an amazing feeling when Karolína was entering the court. You admire someone for several years and then suddenly see her. It was like a dream,” Fabiola said.

But it didn’t end with watching the match from the stands. The Mexican fan was given the opportunity to peek behind the scenes of the world of professional tennis. And it moved her…

“Michal then arranged a meeting with Karolína for me after her practice session… I had a chance to talk to Kája for a few minutes and take some photos as a memory. It was really incredible! You can ask him how I was shaking when I saw Karolína coming to the turnstile where I was waiting,” the Mexican girl described. 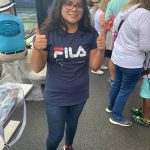 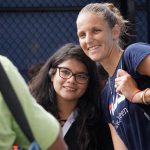 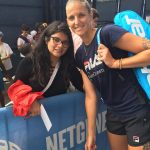 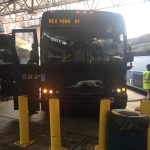 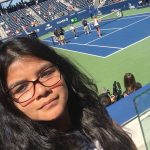 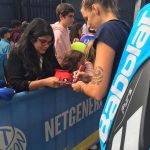 The devotion with which Fabiola Aviles Merino arrived to the season’s last Grand Slam surprised even Karolína’s team.

“We were in touch, but we actually didn’t know how difficult trip she had to make. When she told us about it, we of course gave her match tickets as well as a Fila AceQueen outfit. And Kája bought her a flight ticket back home so she didn’t have to trudge by bus,” said Karolína’s husbnad and manager Michal Hrdlička.

Fabiola leaves New York City at the end of the Grand Slam’s first week, but she will follow Karolína’s efforst remotely: “Saturday is my last day in New York. Unfortunately Kája plays on Sunday, so I won’t see her match anymore. I have job duties back at home. I will keep my fingers crossed at least remotely and I believe that at the end of next week she will lift the US Open trophy.”

To make things clear, Fabiola has been Karolína’s fan since 2014 and two years later she decided to create a fan page of the Czech twins on Twitter and Instagram.

“I saw Kája for the first time when she wasn’t even in the TOP50 and she caught my attention by how focused she was. Most of the players usually show their frustration, emotions. But she was different, she always looked calm and relaxed,” the Mexican remembered the year 2014, when she watched the tournament in Nürnberg.

Then she founded the above-mentioned fan pages. “Karolína’s personality made me follow her more and more. She used to play more slowly, but she’s hugely improving. It’s not just about her serve how many people say. She works really hard on her tennis. I definitely think her performances are the most balanced from all players on the Tour. And although she hasn’t won a Grand Slam yet, I think it’s going to come soon,” the Mexican tennis fan Fabiola concluded.