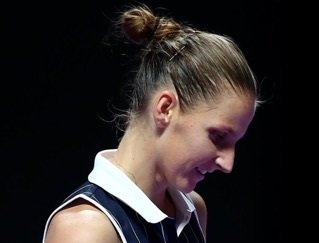 Just like in 2017 and 2018, Karolína reached the top four at the WTA Finals. But yet again she lost in the semifinals, this time after a three-set battle against the world number one Ashleigh Barty of Australia.

Early into the match Karolína was definitely the better player and Barty’s serve was in danger several times. She finally managed to break her serve at 3-2, utilizing her eighth break point. Kája then controlled her narrow lead and won the first set after converting her second set point.

Perhaps the key moments of the match came in the third game of the second set when Karolína was up 40-0 on the Australian’s serve, but she failed to convert any of her four break points, lost her subsequent serve and allowed her opponent to build the decisive lead. Ashleigh Barty gained confidence, started playing more accurately and converted one more break point to tie the match at 1-1.

In the decider both players held their serves until 3-2. Then Karolína posted a double fault and offered a break point chance to her opponent. Ashleigh Barty didn’t say no to this opportunity, capitalized on the break point and then held her serves until the very end. Although Karolína saved three match points in the final game, she didn’t manage to turn the score around.

It’s Karolína’s third consecutive elimination in semifinals at the season-closing event. In Shenzhen she defeated Bianca Andreescu and Simona Halep in the group stage. But she lost the semifinal against Ashleigh Barty in three sets.