Karolína in Brisbane Final after Three-Hour Drama against Osaka! 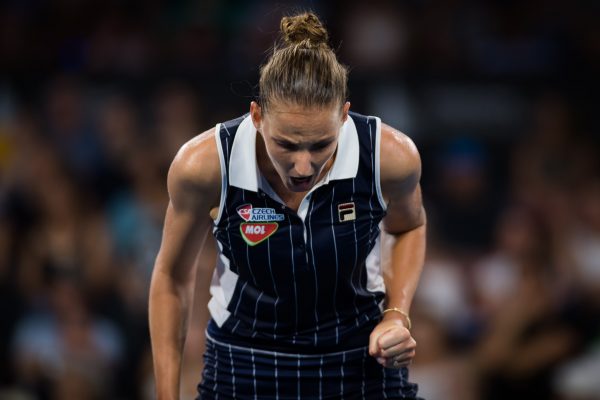 Karolína will again fight for the tournament trophy in Brisbane, Australia after beating Naomi Osaka of Japan in a three-hour battle 6-7, 7-6, 6-2.

On her way to the defense of last year’s title Kája had to face the world number three and the recent world number one, Naomi Osaka, in the semifinal. The match was long tight with the endings deciding both of the first sets.

In the opener, both players held their serves and it was Karolína, who had the first break points at 4-4. But Naomi managed to cope with the tough moment, led the set to a tie-break and converted her fifth break point while saving two Karolína’s opportunities to end the set.

The second set had a similar course, except that Karolína managed to save one match point on her opponent’s serve before the actual tie-break, which she won 7-3 and turned the seemingly lost match into a drama again.

In the third set Karolína’s better mental and physical strength was already apparent – after she saved the match she started dominating on the court. In the very first game Kája broke her opponent’s serve, kept her lead and at 4-2 she survived a tough moment when she saved the game from 0-40 and recorded yet another break only shortly afterwards. Naomi Osaka kept fighting, saved two match points and even had three more break points, but Karolína didn’t allow another drama with her serve.

“I felt I was playing a great match, so maybe I had a bit more energy than otherwise. And also I had nothing to lose in those critical moments. I was much stronger mentally and perhaps also physically. I felt that I wouldn’t let the third set go,” Karolína said after the match.

In the final Karolína will encounter Madison Keys of the United States, who eliminated Petra Kvitová in the semifinal. This is going to be Karolína’s third Brisbane final in the last four years and she already managed to win the trophy twice, in 2017 and 2019.