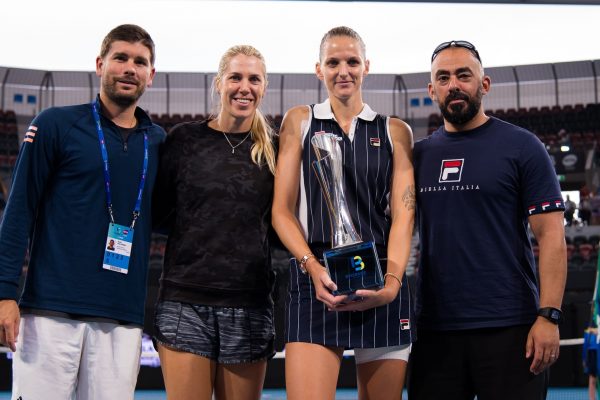 For the third time in her career Karolína won the Brisbane International. In this year’s final she defeated the American Madison Keys in three sets 6-4, 4-6-, 7-5 and defended last year’s title. She already triumphed in Brisbane in 2017 and 2019.

So, just like last year, Kája has opened the season with a tournament win. The title also means a winning debut for the new coach Dani Vallverdu, who was aided with coaching by Olga Savchuk.

For the first time in her career Karolína managed to defend a WTA title and won her 16th tournament. “A title defense is always tough. Many things must click in for you to be in the same form and condition like the year before,” Karolína said after the triumph. “I don’t think it was an ideal tournament from me, maybe last year I played a bit better here, but perhaps this time I fought more and found a way to win matches. And that’s very important,” she added.

Karolína survived several critical moments in Brisbane, with the climax being perhaps the semifinal against Naomi Ósaka. “I beat really great players here, so this time it wasn’t easy at all and maybe when comparet to last year my draw this year was a bit more difficult. Simply said, the start of the year couldn’t have been better,” Karolína smiled.