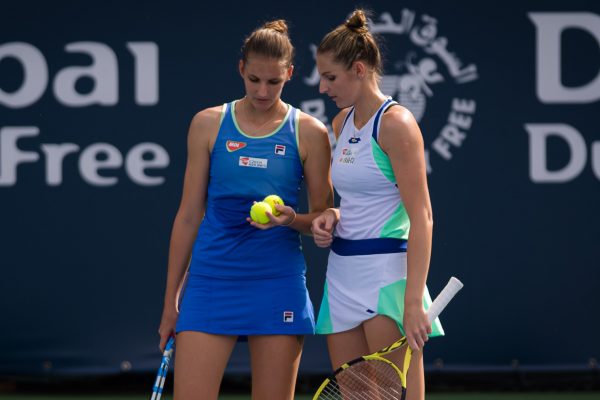 For the first time since October Karolína had a chance to play with her sister Kristýna. At the doubles tournament in Dubai the Czech twins faced the eighth-seeded pair Shuko Aoyama – Ena Shibahara of Japan and won clearly 6-2, 6-2.

Kája and Kristýna encountered the winners of the recent event in St. Petersburg, but they showed their sisters’ cooperation didn’t lose any quality during the past six months and advanced to the second round in less than an hour.

Kristýna tried to qualify for the main event from the qualification, but effort wasn’t successful. So, she waited for her sister to play doubles together. Karolína is seeded as number 2 in singles in Dubai and had a bye in the first round.

In the second round she will face Kristina Mladenovic of France, whom she already met at this year’s Australian Open and won in straight sets. In the opening round Mladenovic overcame the Ukrainian Aliaksandra Sasnovich.