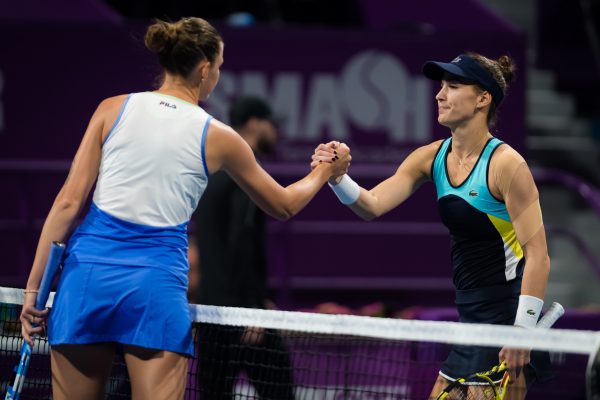 Karolína started the event in Doha, Qatar with a clear win against Bernarda Pera of the United States. In the 2nd round match she allowed only three games to her opponent and finished the encounter after 56 minutes.

Karolína, as the number three seed, played at the center court and broke her opponent’s service in the very first game already. Although Bernarda Pera countered soon to tied the score at 2-2, it was Karolína who dominated throughout the rest of the match and posted a clear victory.

“The beginning was a bit tougher, we both played well and there were a few difficult and long games, but then it broke,” Karolína explained. Karolína even won the second set without losing a single game, while allowing Pera to win only seven points!

“I felt great today. It’s a good start and it’s definitely positive that I can take the things that worked well today to the next match as well,” Kája added.

On Wednesday she will face Ons Jabeur of Tunisia, whom she met last time at the last year’s U.S. Open. “The easy start means nothing. Tomorrow we start from 0-0 again. It will be a different opponent and sh’s definitely going to be strong. Last time we played a three-setter with Ons Jabeur, so I don’t think it’s going to be easy in any way,” Karolína said.