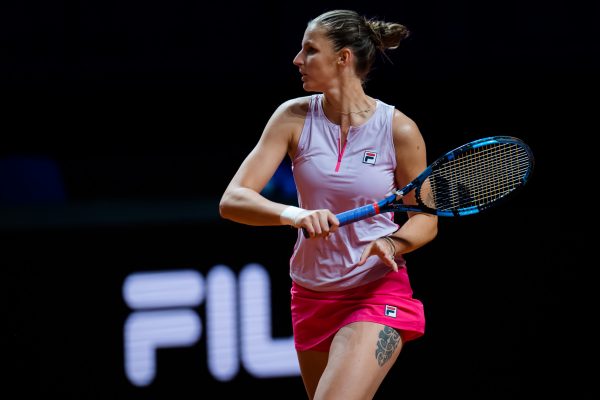 Karolina successfully passed the first round of the Stuttgart tournament after a tough and over two hours long battle with the home player Tamara Korpatsch, whom she defeated 7-5, 3-6, 6-3.

Kája had a very poor start to the match, but managed to win five games in a row and the entire set despite being down 0-3 and 2-5. In the second set she was one break up but lost the advantage and let her opponent turn the score from 3-2 to 3-6.

After a lacklustre performance, Kája finally started outplaying her opponent in the third set, winning important balls towards the end of games and with the help of a few Korpatsch’s unforced errors she built a 5-1 lead. And even though she lost the following game on her serve with a love game, she managed to serve the match out in the end.

“First of all, I have to say that I’m happy that I made it to the second round. But other than that, I didn’t see many good things today. There may have been a few good balls, but it wasn’t the best performance. I think she also played quite tricky tennis, tried to play high balls, and of course I’m still getting used to clay,” Karolína commented on the match.

But she was also plagued by a large number of unforced errors. “I struggled a bit in the rallies. I feel like I made a lot of mistakes from easy shots. Perhaps just the serve was quite OK. But a lot of things have to be improved before tomorrow,” Karolína added.

Tamara Korpatsch, although a player from the second hundred of the WTA ranking, played one of her career’s best matches. “She had nothing to lose, so she played a really good match and deserves credit. She didn’t make any mistakes, but she didn’t put too much of a pressure on me either. But it was mainly up to me,” Karolína concluded her assessment of the match.

On Thursday, Karolína will face the Latvian Jelena Ostapenko, who defeated Stefania Vögele of Switzerland in the first round in straight sets 6-4, 7-5.