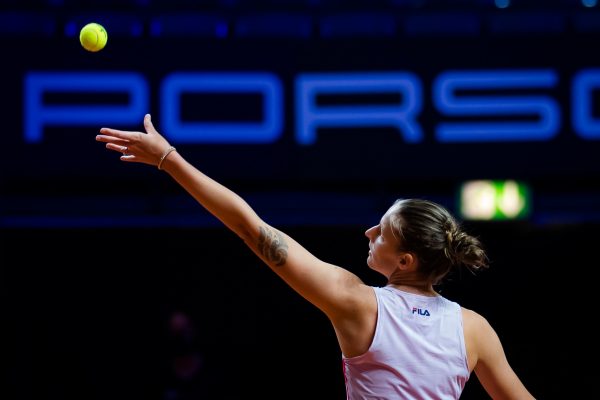 Karolína will play in the quarterfinals of this year’s Porsche Tennis Grand Prix in Stuttgart. She’s won her spot among the top eight players in a three-set battle with Jelena Ostapenko, hitting 21 aces and breaking two rackets along the way.

Ostapenko is good on clay, which she proved by winning the Rolland Garros Grand Slam, but this time she was on the back foot on the court. Despite losing the first set in the tiebreak, Karolina did not give up and turned the score around thanks to her great serve.

The end of the first set offered some drama as Ostapenko was up by 4-0, Karolina turned it around to 4-5, but in the end it was the Latvian who won the opening set. From the second set onwards, however, Kája played confident tennis and managed to eliminate her opponent’s dangerous cross balls. She attacked Ostapenko’s serve in almost every game and although she faltered while leading 5-2, she did not allow any further complications.

Karolína decided the third set thanks to a broken serve at 3-2, when she created a decisive gap in the score and led the match to victory with her serve.

“Today I did many things much better than yesterday. I’m proud of myself that I was able to change my performance so rapidly in one day. I felt I was playing really good tennis this time, but Jelena played really well too. We both often make a lot of unforced errors, but that didn’t happen today,” Karolína commented on the match.

In the end, the match stretched for two and a half hours and over time Karolína managed to have the upper hand over her opponent. “I served extremely well throughout the match, although I was a bit unlucky in the first set. It was really frustrating to lose the tiebreak, but I didn’t want to give up just because I lost the first set,” added Karolina, who broke her racket twice in critical moments and received a warning. “I had to release the tension inside me. Even though I smashed the racket, I think it helped. I played more aggressively and went for my shots.”

In the quarter-finals, Karolína will face the world number one Ashleigh Barty from Australia.