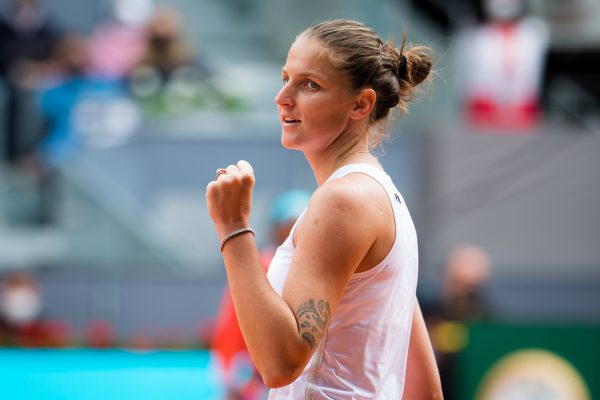 Karolína had to use all her experience in order to win her opening match at the Mutua Madrid Open. In the end she overcame the young rising star of world tennis Cori Gauff in three sets 5-7, 6-3, 6-2.

Kája struggled in the first set and despite focusing mainly on her serve, she made seven double faults. And even though she managed to come back from a 3-5 deficit, she recorded a lot of unforced errors, lost the last two games of the opening set and Gauff enjoyed a 1-0 lead.

From the second set on, however, it was a different Karolína on the court – focused and accurate. The turnaround in the match came thanks to Kája’s improved play, although she waited until 3-2 for the first break. Before that she managed to save two break points and subsequently brought the match under her control. Karolína won the second set 6-3 and in the third set she took an early 4-0 lead and was on her way to the second round.

Gauff resisted, reduced the gap to 2-4, but Karolína did not allow any further drama.

“We never played so it was definitely a difficult match. I think I didn’t start really well, but later in the match, I was finding my game and finding my serve. This was very important in this match because she can also serve very big,” Karolína commented on her match with Cori Gauff.

“I’m super happy that I’m through. I’ve played one semifinal here, so I’ve had a couple of good matches here in the past, but I’m hoping to hopefully improve my game in the next match,” added Karolína.

Karolína’s next opponent will be Anastasia Pavlyuchenkova, who defeated Madison Keys 7-5, 6-2. Although Kája has a better record with her Russian rival (6-1), they never faced each other on clay.